Conservative Lawmaker Demands Answers to These 18 Questions About Russia, FBI 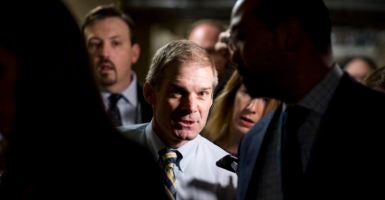 One member of Congress says “the American people deserve answers” to 18 questions he has regarding Russia and the FBI.

“We’d like for the FBI and the [Justice Department] to turn over the documents that Chairman [Devin] Nunes has requested, give the documents to Congress that we requested, that’s first and foremost,” Rep. Jim Jordan, R-Ohio, told The Daily Signal in a phone interview Wednesday, referring to the California Republican who is chairman of the House Permanent Select Committee on Intelligence.

“We’d like answers to the two fundamental questions, the questions that we started with: Did the FBI pay Christopher Steele, [and] were they paying him the same time that the DNC and the Clinton campaign were paying?”

Steele, a former British intelligence officer, authored a document containing allegations that Trump had connections with Russia. The dossier was written for Fusion GPS, a research firm that was paid by the Democratic National Committee and Hillary Clinton’s presidential campaign.

Fox News reported last week that Nunes, chairman of the House intelligence committee, “is blasting the Department of Justice and the FBI for its ‘failure to fully produce’ documents related to an anti-Trump dossier, saying ‘at this point it seems the DOJ and FBI need to be investigating themselves.’”

“Unfortunately, DOJ/FBI’s intransigence with respect to the August 24 subpoenas is part of a broader pattern of behavior that can no longer be tolerated,” Nunes wrote in a Dec. 28 letter to Deputy Attorney General Rod Rosenstein, according to Fox News.

“As a result of the numerous delays and discrepancies that have hampered the process of subpoena compliance, the committee no longer credits the representations made by DOJ and/or the FBI regarding these matters,” he added.

“Did they substantiate the dossier?” Jordan asked. “Did they actually even check and see, is this thing accurate? James Comey said it was salacious, nonverified, right, so Comey testified under oath that it wasn’t accurate. But what work did the FBI do to figure out if it in fact was accurate?”

2) Was the dossier the basis for securing FISA warrants to spy on Americans? And why won’t the FBI show Congress the FISA application?

4) Did the FBI validate and corroborate the dossier?

6) Why and how often did DOJ lawyer Bruce Orr meet with dossier author Christopher Steele during the 2016 campaign?

8) When and how did the FBI learn that DOJ lawyer Bruce Orr’s wife, Nellie Orr, worked for Fusion GPS? And what exactly was Nellie Orr’s role in putting together the dossier?

10) And why did FBI release only 375/10,000+ texts? Were they the best? Worst? Or part of a broader strategy to focus attention away from something else? And when can Americans see the other 96% of texts?

12) Why did the intelligence community wait two months after the election to brief President-elect Trump on the dossier (January 6, 2017)? Why was James Comey selected to do the briefing?

14) The New York Times reported last week that George Popadopoulos’ loose lips were a catalyst for launching the Russia investigation. Was President-elect Trump briefed on this?

16) Why was FBI General Counsel Jim Baker reassigned two weeks ago? Was he the source for the first story on the dossier by David Corn on October 31, 2016? Or was it someone else at the FBI?

18) And why would @SenSchumer, leader of the Democrat party, publicly warn President-elect Trump on Jan. 3, 2017 that when you mess with the “intelligence community, they have six ways from Sunday at getting back at you?”