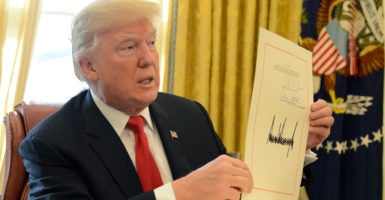 In moves that may defuse efforts to mandate higher minimum wages across the nation, at least nine of the 33 businesses announced they are boosting their minimum wage for thousands of workers to $15 or more an hour.

“Happy New Year and welcome to 2018, where Americans are waking up across the country with a brand new, pro-growth tax code,” the Wisconsin Republican’s press office says.  “Despite the doom and gloom rhetoric from the left and special-interest groups, millions of hardworking people are already seeing benefits.”

Insurance company Aflac says it will boost U.S. investments by $250 million and increase 401(k) benefits for employees, including a one-time contribution of $500 to every worker’s retirement savings account.

Southwest Airlines announced a $1,000 cash bonus for all employees, including part-timers, plus $5 million in charitable donations.

JUST IN: Southwest Airlines to give all full-time and part-time employees a $1,000 cash bonus on Monday & company will also make $5M in charitable donations and invest in its Boeing fleet due to tax reform passage. https://t.co/YKho1O67Ek

President Donald Trump, who made passing tax reform a top goal of his first year in office and signed the bill into law Dec. 22, has praised businesses for their positive response.

Companies are giving big bonuses to their workers because of the Tax Cut Bill. Really great!

The package caps at $10,000 the state and local tax deduction, which allows taxpayers who itemize instead of taking the standard deduction to deduct from federal taxable income any property and income taxes paid to state or local governments.

The package repeals Obamacare’s mandate for individuals to buy health insurance, increases the $1,000 child tax credit to $2,000, and provides a $500 credit for child dependents who aren’t minors.

The legislation reduces the federal corporate tax rate from 35 percent to 21 percent and repeals the corporate alternative minimum tax.

Hours after Congress passed the legislation, AT&T announced it would give a $1,000 bonus to over 200,000 U.S. employees and invest $1 billion in the economy and Boeing announced a $300 million investment, as The Daily Signal previously reported.

CVS announced it would hire 3,000 new workers and FedEx said it would increase hiring.

Adam Michel, policy analyst for economic studies at The Heritage Foundation, told The Daily Signal in an email Wednesday that such announcements are just the beginning.

“Raises, bonuses, and new investments spurred by tax reform show that the Republicans’ tax reform is working how they said it would,” Michel said, adding:

Businesses across America are putting their tax cuts to work for the American people. This first wave of stories is great news, but the real benefits are yet to come. Tax reform expands the economic pie so that more Americans will be better off.

As businesses and their competitors continue to increase investment in the U.S., workers’ yearly wages will also go up and underemployed households will see the biggest benefits from new jobs.

Below is the list of the groups and businesses included in the email from Ryan’s office. The full list may be viewed here.

Aflac: $250 million boost in U.S. investments and increased 401(k) benefits, including one-time contribution of $500 to every employee’s retirement savings account.

Aquesta Financial Holdings: $1,000 bonus to all employees, increase in minimum wage to $15 per hour.

Associated Bank: $500 bonus to nearly all employees and increased minimum wage to $15 per hour, up from $10.

First Horizon National Corp.: $1,000 bonus to employees who do not participate in company-sponsored bonus plans.

Kansas City Southern: $1,000 bonus to employees of subsidiaries in the U.S. and Mexico.

Melaleuca: $100 bonus for every year an employee has worked for the company—an average of $800 for each of 2,000 workers.

National Bank Holdings Corp.: $1,000 bonus to all noncommissioned associates who earn a base salary under $50,000.

Nephron Parmaceuticals: wage increase of 5 percent for its 640 employees.

Pinnacle Bank: $1,000 bonus for all full-time employees in Nebraska, Kansas, and Missouri.

Washington Federal, Inc.: wage increase of 5 percent for employees earning less than $100,000 per year and increased investments in technology infrastructure and community projects.

Western Alliance: wage increase of 7.5 percent for the lowest-paid 50 percent of employees.