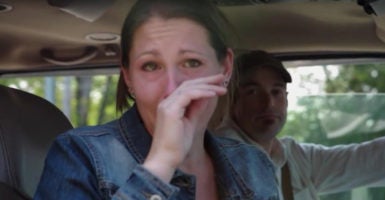 A husband-and-wife baking team must pay a $135,000 fine for declining to make a cake for the wedding of two women, Oregon’s second-highest court has ruled.

A three-judge panel of the Oregon Court of Appeals on Thursday upheld a decision by a state agency that led to the fine and forced Aaron and Melissa Klein to close their bakery.

The court ruled that baking wedding cakes is not “speech, art, or other expression” protected by the First Amendment. The judges said the state did not “impermissibly burden the Kleins’ right to the free exercise of religion” because it compelled the Christian bakers only to comply with “a neutral law of general applicability.”

Oregon law prohibits businesses from refusing service because of a customer’s sexual orientation, as well as because of race, gender, and other personal characteristics.

“We are very disappointed in the court’s decision,” Michael Berry, deputy general counsel at First Liberty Institute, which represents the Kleins, told The Daily Signal in a phone interview Friday. “I think that punishing people for their religious beliefs is … not American, and it’s wrong.”

“It does not matter how you were born or who you love,” one of the lesbians, Laurel Bowman-Cryer, said in a written statement following the ruling. “All of us are equal under the law and should be treated equally. Oregon will not allow a ‘Straight Couples Only’ sign to be hung in bakeries or other stores.”

The Kleins had owned and operated Sweet Cakes by Melissa, a bakery in Gresham, Oregon.

>>> Bakers Accused of Hate Get Emotional Day in Court

After the Kleins declined in 2013 to make a cake for the wedding of Rachel and Laurel Bowman-Cryer, citing their Christian religious beliefs that marriage is the union of a man and a woman, they also faced protests that eventually led them to shut down their bakery.

In July 2015, an administrative judge for the Oregon Bureau of Labor and Industries ruled that the Kleins violated state law by discriminating against the Bowman-Cryers on the basis of their sexual orientation. The judge ordered the Kleins to pay the $135,000 for physical, emotional, and mental damages to the two women, as The Daily Signal previously reported.

Berry, the First Liberty attorney, said his legal team is deciding how they will move forward, which could mean appealing to the Oregon Supreme Court.

“We’re evaluating our options at this point, obviously in terms of whether we are going to appeal, etc., and we’ll discuss all those options with Aaron and Melissa Klein and decide on the best course of action for them,” Berry said.

In a written statement, Kelly Shackelford, president and CEO of First Liberty Institute, a nonprofit legal organization dedicated to protecting religious liberty, said the Kleins are being denied free speech.

Berry said the Kleins’ situation is an abuse of their religious freedom.

“I think it’s a sad day for our Constitution and for the rule of law in this country when a family-owned bakery can be put out of business simply for trying to follow their religious beliefs,” he said.