Cutting Through the Media’s Falsehoods About ‘Dreamers’ 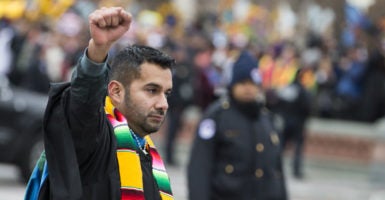 A protester partakes in a demonstration in support of DACA outside the U.S Capitol. (Photo: Alex Edelman/Zuma Press/Newscom)

When members of Congress battled over the budget, some threatened to block funding unless Congress provided amnesty to illegal alien Dreamers who benefited from President Barack Obama’s Deferred Action for Childhood Arrivals program, which President Donald Trump announced he is ending.

Conscientious members of Congress should not give in to this threat. Amnesty will encourage even more illegal immigration—just as the 1986 Immigration Reform and Control Act did.

However Congress decides to deal with Dreamers, it should be based on the real demographics of the DACA populace, not the glamorized image typically presented by the media.

Watching television reports concerning Dreamers, one would think that the DACA program applied only to college-educated immigrants who were just a few years old when their parents brought them into the country illegally.

We are led to believe that most are so fully Americanized that they would now have trouble speaking their native language and are all but ignorant of their birth countries’ cultural norms. Thus, we are supposed to believe returning them to their native lands would be a cruel hardship.

In fact, many DACA beneficiaries came here as teenagers. All were eligible for the program as long as they entered the U.S. before their 16th birthday. By that time, there is no doubt that they spoke the language of their native countries fluently and knew their culture intimately.

DACA had no requirement of English fluency, as evidenced by the application form that had a space to list the translator used to complete the form.

Unfortunately, many Dreamers are poorly educated. Only 49 percent of DACA beneficiaries have a high school education, even though a majority are now adults. And while military service could also qualify an illegal alien for DACA, out of the current 690,000 DACA beneficiaries, only 900 are serving in the military.

The Obama administration did not check the background of each DACA beneficiary, despite a requirement that they have no felony convictions and pose no threat to national security. Only a few randomly selected DACA applicants were ever actually vetted.

This may explain why, by August this year, more than 2,100 DACA beneficiaries had had their eligibility pulled because of criminal convictions and gang affiliation.

Even if a random background investigation produced substantial evidence that an illegal alien might have committed multiple crimes, the alien would still be eligible for DACA if he wasn’t convicted.

Thus, it seems that a significant percentage of DACA beneficiaries have serious limitations in their education, work experience, and English fluency. What’s the likelihood that they’ll be able to function in American society without being substantial burdens to U.S. taxpayers?

Without changing the sponsorship rules, any congressional amnesty bill providing citizenship could significantly increase the number of illegal aliens who will benefit beyond the immediate DACA beneficiaries. Giving lawful status to Dreamers will allow them and their families to profit from illegal conduct.

History shows that providing amnesty will attract even more illegal immigration and won’t solve our enforcement problems. Congress shouldn’t even consider such relief unless and until we have a sustained period of concentrated enforcement that stems illegal entry and reduces the illegal alien population in the U.S.

Congress should instead concentrate on providing the resources needed to enforce our immigration laws and secure our border.