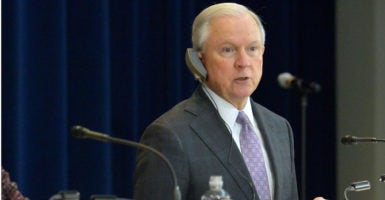 More than 1 in 5 of all federal inmates in the U.S. Bureau of Prisons are immigrants, as of the end of the fiscal year 2017, a federal report released Thursday said.

The report also found that 94 percent of confirmed foreign-born inmates in federal incarceration were in the country illegally.

The Justice Department and Department of Homeland Security issued their final quarterly report for 2017 measuring progress since a January executive order by President Donald Trump to crack down on illegal immigration.

The report also found that about two-thirds of all immigrants in the custody of U.S. Marshals Service were in the United States illegally.

“This shows undeniably the need to secure the southern border with a wall to prevent many of the crimes from occurring,” a senior administration official said.

This is the third report issued since a Jan. 25 executive order regarding interior enforcement of immigration laws.

The reports have been primarily raw numerical data of confirmed foreign-born and illegal immigrants incarcerated. Officials said they hope future reports will have a breakdown of specific crimes, as well as information on state and local incarcerations.

The report found 58,766 known or suspected aliens were in Justice Department custody at the end of fiscal 2017, or Sept. 30. That included 39,455 persons incarcerated by the Bureau of Prisons, or BOP, and another 19,311 held by the U.S. Marshals Service, or USMS.

Of this total, 37,557 people had been confirmed by U.S. Immigration and Customs Enforcement (ICE) to be aliens (i.e., non-citizens and non-nationals), while 21,209 foreign-born people were still under investigation by ICE to determine alienage.

“The American people deserve a lawful system of immigration that serves the national interest,” Attorney General Jeff Sessions said in a statement issued Thursday. “But at the border and in communities across America, our citizens are being victimized by illegal aliens who commit crimes.”

Nearly 95 percent of confirmed aliens in our federal prisons are here illegally. We know based on sentencing data that noncitizens commit a substantially disproportionate number of drug-related offenses, which contributes to our national drug abuse crisis.

The simple fact is that any offense committed by a criminal alien is ultimately preventable. One victim is too many. It’s time for Congress to enact the president’s immigration reform agenda so that we start welcoming the best and brightest while turning away drug dealers, gang members, and other criminals.

Secretary of Homeland Security Kirstjen Nielsen noted the Trump administration is taking action but the report shows “more must be done.”

“We will continue to pursue President Trump’s immigration priorities, including securing the border, enhancing interior enforcement, and pursuing a merit-based immigration system, but Congress must act immediately to adopt obvious solutions to strengthen DHS and DOJ efforts to confront dangerous criminal aliens,” Nielsen said in a statement Thursday

Senior administration officials said the departments are still working to obtain local and state data for future reports. Such information is critical because about 90 percent of the incarcerated population is in state and local prisons or jails.

A senior administration official noted that a vast majority of murder, sex offenses, and other serious crimes are prosecuted at the state and local level, which is another reason this information will be so important to obtain.

“As of September 28, 2017, a total of 24,476 confirmed aliens were housed in BOP facilities, and an additional 14,979 foreign-born individuals in BOP facilities remained under ICE investigation; together these known and suspected aliens accounted for 21 percent of all federal inmates in BOP custody,” the report says.

As of October 2, 2017, a total of 19,311 known and suspected aliens were housed in USMS facilities. Of the confirmed aliens in USMS custody, 66 percent (12,720) were unlawfully present, including 11,459 aliens (59 percent) with an administrative final order of removal and 1,261 aliens (6.5 percent) who were unlawfully present but pending adjudication in removal proceedings.