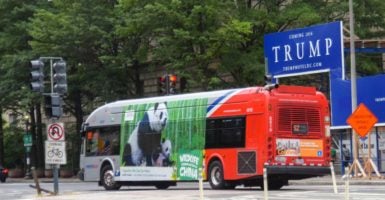 Metro’s advertising guidelines, which it amended in 2015, prohibit a wide array of noncommercial advertisements, including those with political or religious messages. (Photo: Bao Dandan Xinhua News Agency/Newscom)

Last week, a federal judge denied a motion from the Archdiocese of Washington for an injunction directing the Washington Metropolitan Area Transit Authority to accept and run the archdiocese’s advent advertisements on Metrobuses.

The advertisements, which featured shepherds following a star, urged people to “find the perfect gift” by directing them to a website with Catholic mass times and other religious content.

Metro previously rejected the advertisements as inconsistent with its advertising guidelines, which prohibit, among other things, “advertisements that promote or oppose any religion, religious practice or belief.” The archdiocese initiated a lawsuit in federal district court against Metro, asking that the guideline in question—Guideline 12—be declared unconstitutional.

This is far from the first lawsuit against Metro’s advertising guidelines, which it amended in 2015 to prohibit a wide array of noncommercial advertisements, including those with political or religious messages, endorsing public policies, or attempting to influence public opinion on contentious social issues.

What does this ruling mean? What are the legal arguments being raised against these guidelines? Could Metro have avoided these lawsuits by implementing more flexible policies?

The Injunction Denial Is Far From the End

The federal district court judge only declined to issue a preliminary injunction, which is different than deciding whether the guideline is constitutional.

An injunction is merely a request to make the other party to the lawsuit act or stop acting in a certain way, pending the outcome of the case. The archdiocese essentially asked the judge to require that Metro run its advent advertisements until the court rules on whether Guideline 12 is constitutional.

A preliminary injunction is an “extraordinary and drastic remedy” that is “never awarded as [a matter] of right” (Munaf v. Geren). In other words, it’s intentionally difficult for a party to obtain one.

The judge determined that the archdiocese did not establish that it was likely to succeed on the merits of its case, and that it would not suffer irreparable harm if Metro isn’t required to run the advent advertisements in the interim. On Wednesday, the D.C. Circuit Court of Appeals also declined to issue a preliminary injunction for similar reasons.

Legal Arguments Against the Guidelines

The archdiocese raises several legal challenges to Guideline 12, some of which are complicated by the fact Metro is a unique tri-jurisdictional agency, created by Congress as an interstate compact between Maryland, Virginia, and the District of Columbia. It’s difficult to ascertain whether and how this might impact the archdiocese’s claims that Guideline 12 violates the Religious Freedom Restoration Act, a federal statute that the Supreme Court ruled cannot constitutionally be applied to the states (City of Boerne v. Flores).

The other major claims, however, appear fairly straightforward.

The archdiocese’s first claim is that Guideline 12 impermissibly restricts its First Amendment right to free speech. Because Metro is a government agency, this case is governed by law concerning the regulation of speech on government property. This means the restriction will be analyzed under the “Public Forum Doctrine,” which categorizes government property as either a traditional public forum, a designated public forum, or a nonpublic forum.

In traditional and designated public forums, regulations that discriminate against speech on the basis of its viewpoint or content are almost always struck down as unconstitutional. In nonpublic forums, however, content-specific regulations may be allowed as long as they are both reasonable and viewpoint-neutral.

The archdiocese contends primarily that Metro’s prohibitions are not viewpoint-neutral and are enforced in a discriminatory manner against religious expression. It points out that Metro allows advertisements for the Salvation Army’s Red Kettle charity drive and for a yoga studio, both of which arguably promote religion and religious practices. Further, it argues that Metro allows secular and commercial viewpoints on the Christmas season, while disallowing any promotion of the holiday’s inherently religious underpinnings.

The archdiocese’s second major claim is that Guideline 12 burdens its First Amendment right to freely exercise its religious beliefs.

Similarly to laws and regulations restricting speech, regulations burdening a person or organization’s religious practices must be neutral and generally applicable to survive legal challenges (Emp’t Div. v. Smith). If they are not neutral and generally applicable, they must survive strict scrutiny—that is, they must advance a compelling state interest, be necessary to achieve that interest, and be narrowly tailored to achieve that interest.

To be neutral and generally applicable, laws and regulations cannot single out religious speech or practices for disfavored treatment, and they cannot be enforced in a discriminatory manner against religious practitioners. (Lukumi Babalu Aye v. City of Hialeah).

The archdiocese argues that Metro’s prohibitions disfavor religious speech in general, and establish a preference for nonreligious institutions and viewpoints. In practice, the prohibitions silence all ideological challenges to secularism.

Although absent from the archdiocese complaint, it should be noted that at the same time Metro banned all religiously-oriented viewpoints because of their polarizing nature, it amended the guidelines to allow the advertisement of alcoholic beverages—an equally polarizing advertising topic, according to Metro’s own research.

As the late Justice Antonin Scalia famously noted, “It is entirely possible for a law to be really, really stupid and yet be constitutional.” Here, Metro notoriously demands increased funding while simultaneously rejecting revenue streams from fairly uncontroversial advertisements that technically violate its broad advertising guidelines.

Metro’s desire to adopt more restrictive guidelines was not completely unreasonable in and of itself—they were initially amended in 2015 after a proposed advertisement picturing a cartoon of the Prophet Muhammad caused significant and not entirely unfounded fears of violent backlash.

Similar public outrage had occurred in 1988 after Metro allowed advertisements alleging Israeli human rights violations against Palestinians, in 1995 when it ran anti-abortion advertisements, and in 2001 over advertisements attacking the Catholic Church’s stance on the use of condoms.

It is understandable that Metro sought ways to constitutionally prohibit these types of controversial advertisements that could legitimately hamper its ability to achieve its primary aim—safely getting a D.C. area passenger from Point A to Point B.

However, there are other ways in which Metro could achieve this goal with more narrowly tailored advertising guidelines that could prohibit only those advertisements likely to be harmful or disruptive to the transit system. Had it adopted guidelines similar to those implemented by the King County (Seattle) Department of Transportation, all of this unnecessary litigation and public relations nightmare could have been avoided.

Seattle’s transit advertising guidelines offer perhaps the best example of a healthy balance between raising revenue, treating viewpoints equally, and still ensuring that inflammatory advertisements will not threaten the efficiency of the system or the safety of passengers.

Its prohibitions are limited in scope, and provide flexible but instructive guidelines for assessing whether a particular advertisement falls within a particular prohibition.

Notably, Seattle prohibits political campaign speech and speech that “demeans or disparages an individual, group of individuals, or entity.” But the most relevant prohibition bars advertisements containing “material that is so objectionable as to be reasonably foreseeable that it will result in harm to, disruption of or interference with the transportation system.”

For all of these arguably subjective standards, King County seeks to make the process more objective by employing a “reasonably prudent person” test to determine whether the advertisement would be generally understood as violating the prohibitions on demeaning or disruptive material. In Washington, as in many states, this test has developed a substantial body of judicial precedent that allows for fairly consistent and discernable outcomes.

The practical benefit of this standard is that it protects King County’s interests in passenger safety by actually focusing the prohibitions on material most likely to impact passenger safety and business efficiency. The “harmful or disruptive” prohibitions are not concerned with quashing viewpoints, either on an individual or categorical level. Rather, the concern is much more aligned with “reserv[ing] the forum for its intended purposes,” (see Perry Educ. Ass’n) which is the provision of safe and reliable public transportation.

Under similar guidelines, Metro could have allowed the archdiocese to run its advertisements, while still having an emergency fire extinguisher to eliminate the would-be flames likely to be prompted by advertisements depicting Muhammad or accusing the Catholic Church of murder.

Although this lawsuit is still in its infancy, it appears—for this Christmas, at least—the archdiocese will not be able to run its advertisements on Metrobuses. It is too early to make conclusions on how the court will rule on the merits, as many more facts about whether and how Metro enforces its policy in a discriminatory way may come to light as the litigation proceeds.

One thing, however, is abundantly clear: Metro could have avoided this problem by adopting more narrowly tailored prohibitions that don’t exclude advertisements unlikely to cause disruptions to transit service.

At the very best, Guideline 12 might pass constitutional muster (barely). That doesn’t make it any less worthy of being repealed as a bad policy.