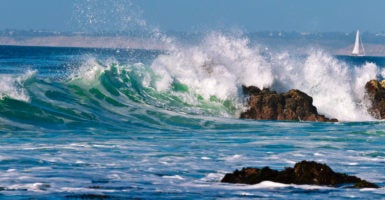 A state commission is reluctant to approve seawalls to restrain waves like these ones crashing near the beach at Pacific Grove, California. (Photo: Russ Bishop Stock Connection Worldwide/Newscom) 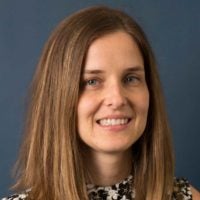 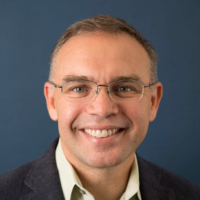 Larry G. Salzman is a senior attorney at Pacific Legal Foundation, a public interest law firm based in California, where he litigates cases involving property rights and economic liberty.

“Pacific” means peaceful. But the ocean that bears that name doesn’t always live up to it.

Ask any oceanfront resident who has weathered the damaging storms and waves that winter can bring. Combined with relentless tides, they can threaten homes by eating away the land underneath.

How can oceanfront homeowners safeguard their property, even their lives, from the erosive power of the Pacific?

Over the decades, many residents on the California coast have built seawalls of rock, concrete, or other sturdy material to protect their homes. In a sense, they share a kinship with the people of Holland, who have spent centuries defending their livelihoods by holding back the North Sea. But while the Dutch pushed back the waters to “reclaim” the land beneath them, California’s oceanfront residents simply want to protect the dry land that is already there—their own private property.

This understandable desire has solid grounding in the law. The California Coastal Act recognizes the right of homeowners to use seawalls to protect their homes against erosion. The guarantees of property rights  in the state and federal constitutions offer additional support.

However, the California Coastal Commission, which oversees land use in coastal regions, is another story. The commission has a notorious tradition of disrespecting property rights. Its policy on seawalls is particularly troubling.

That policy can be reduced to a phrase: The commission is against seawalls. The hostility is expressed in technological terms, focusing on concerns about rising ocean levels and shrinking beaches. But instead of analyzing specific impacts of specific seawall proposals, the commission has imposed one-size-fits-all restrictions that smack more of ideology than scientific rigor.

For some years, when homeowners have sought permits to repair or replace existing seawalls, the commission has come back with harsh demands such as time limits on  a permit—leaving the owners in fear they’ll have to tear out their seawalls and abandon their homes in the future.

The agency has gone further by imposing heavy-handed conditions on new residential development. If you own a coastal lot and want to build, you must promise never to put in a seawall to protect your future home from the ocean’s force.

This edict is a direct threat to owners of oceanfront property, of course. But it should concern all of us, no matter where we live, because it is an example of a powerful state agency abusing its authority.

When regulators propose a policy like this, California law says they must give notice to the public, conduct hearings, and allow public comment. The commission did none of this. It imposed its anti-seawall restriction by fiat.

The commission skirted the legal and procedural requirements that are designed to keep bureaucrats accountable to the Legislature and the public. Indeed, one of the underpinnings of a free society is the assurance that those who write laws and regulations are answerable to the rest of us who must live under them.

Ultimately, this means lawmaking is the role of elected legislators. To the extent that writing regulations has been delegated to administrative bodies such as the commission, their decision-making must be fully open to public review and participation. Yet, the seawall policy was developed without input from property owners or anyone else outside of a cloistered circle of staffers and commissioners.

Foisting this edict on the public through raw bureaucratic power is especially galling because the scheme is so sweeping and the apparent end  game is so radical. The commission has embraced a strategy of allowing the whole of California’s shoreline to give way gradually to erosion.

“Planned retreat” is its euphemistic name. But no euphemism can obscure the reality. What would “retreat” is the land, homes, and dreams of real people. Over time, their property would disintegrate, all under a scheme that never has been signed off on by the Legislature or even run through the barest safeguards of the rulemaking process.

“For some spots, 50 years from now, houses may be lost,” as the mayor of Pacific Grove put it to a reporter, discussing how his city is working to implement what the California Coastal Commission calls its shoreline management directives. “And planning for that is very, very difficult. Because nobody wants to volunteer and say, ‘OK, let the ocean take my property.’”

Pacific Legal Foundation, the public interest law firm where we work, recently asked state officials to acknowledge formally that the Coastal Commission acted unlawfully in implementing its “no seawalls” rule for new residential development. A courtroom legal challenge may follow.

The Coastal Commission’s rogue behavior in its anti-seawall crusade must be checked—not just for the sake of property rights along the coast and everywhere else in California, but for the stake that we all have in the rule of law.