Who Wouldn’t Have Coverage If the Obamacare Mandate Is Repealed 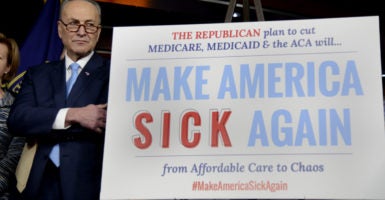 The prospect that Congress might zero-out Obamacare’s individual mandate penalty in the pending tax bill has sent Obamacare defenders into flights of pessimistic rhetoric, up to and including the charge that “thousands will die” as a result.

The argument by which that attention-grabbing conclusion is reached runs something like this:

Indeed, none other than Harvard economist and former Treasury Secretary Larry Summers recently deployed that argument, claiming that eliminating Obamacare’s mandate tax penalty in the tax bill would result in the death of 10,000 people per year.

In response, University of Chicago economists Casey Mulligan and Tomas Philipson argued that research on the connection between insurance coverage and mortality has found no more than a weak linkage between the two. They note that part of the explanation may be “that lack of coverage does not necessarily imply lack of lifesaving care as hospitals cannot turn away emergency-care patients without coverage.”

Summers, joined by professor Jonathan Gruber of the Massachusetts Institute of Technology, a prominent “architect” of Obamacare, then fired back, doubling-down on Summers’ original claim.

At one level, this is a classic argument among academics—complete with each side accusing the other of basing its case on a “selective” use of evidence in the professional literature. What, however, should the rest of us make of it?

To start with, a recent review of the academic literature on the subject finds a mixed bag, but with the strongest link between coverage and health outcomes in cases where health insurance coverage improves access to care, “particularly among people with lower incomes and chronic conditions.”

That makes sense. Having health insurance makes less of a difference to people with higher incomes who can afford to pay for more of their medical care directly. Similarly, the difference between being insured versus uninsured appears to be marginal to the healthy person with an infrequent need for care—though going without health insurance can turn out to be a bad bet if a major illness or accident strikes.

That leads us to the crucial, practical question that this academic debate largely misses: Who are the people that would no longer have health insurance if the mandate penalty were repealed?

For that we turn to the source of the projected coverage losses: the Congressional Budget Office. Setting aside for the moment the—entirely separate—debate over the accuracy of the CBO’s specific numbers, the agency projects that eliminating the mandate penalty will result in roughly 13 million fewer Americans having coverage by 2027. Of that number, the CBO estimates that 5 million fewer people will be enrolled in individual market coverage; 5 million fewer in Medicaid; and more than 2 million fewer in employer group coverage.

The CBO is explicit on this point: “Those effects would occur mainly because healthier people would be less likely to obtain insurance and because, especially in the non-group market, the resulting increases in premiums would cause more people to not purchase insurance.”

This is a crucial point. Healthier people are less likely to die a premature or preventable death than unhealthy people, regardless of income or health insurance status.

That explains the CBO’s somewhat counterintuitive projection that, without a mandate penalty, millions of poor people will turn down the offer of free Medicaid coverage. The reason is they don’t think they need it (because they are healthy) and if they become ill and seek care at a hospital, they know the hospital will enroll them in Medicaid to get paid.

It also explains the CBO’s other counterintuitive projection: that eliminating the mandate penalty will generate higher tax revenues.

While not collecting mandate penalties brings in less revenue, the CBO projects there will be new revenues coming from the healthy people who decide to turn down tax-free employer health insurance in exchange for higher (taxable) cash wages. Presumably, the CBO thinks being healthy and very much alive are basic prerequisites for expecting those folks to generate additional tax revenues.

Repeal of the Obamacare mandate will not result in social catastrophe. Supporters of the mandate would have a more compelling argument if millions of poor and sick persons would be thrown out of their existing coverage, struggling with potentially fatal chronic illnesses and unable to get insurance to maintain continuous access to regular care. But that is not what the CBO is projecting.

The mandate supporters’ argument is hardly compelling, to say the least, when the cohort of the future uninsured are healthy people who simply choose not to buy Obamacare coverage because they believe they don’t need it or want it.

However, while keeping the individual mandate in place is not the answer, there are actions lawmakers can take to make health insurance more affordable, and more flexible in terms of providing a wider variety of plans that match people’s needs with their desired prices.

Already, rising insurance costs today threaten continuation of health insurance coverage among millions of middle-class Americans in the individual and small group markets who are ineligible for taxpayer subsidies. It’s time for lawmakers to make changes that give cheaper insurance options for those who want it—and time to stop forcing all Americans to purchase expensive health insurance they may not need or want.

This article has been corrected to reflect that a particular argument was made by Obamacare mandate supporters, not the CBO.