The State Government Agency That Spied on Citizens 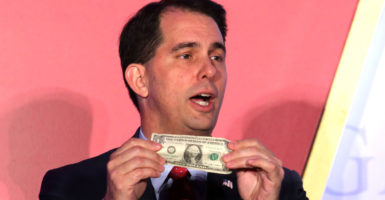 A new report on a government spying operation conducted by partisan bureaucrats should outrage and scare Americans everywhere. It shows what can happen when, as the report says, partisans “weaponize” a government agency and use its powers to advance “political goals.”

Americans already have seen that when federal bureaucrats such as Lois Lerner or Samantha Power do that with the fearsome power of the IRS and our intelligence agencies, we face a threat to our liberty and the democratic process that is unparalleled in our history.

The 88-page report by Wisconsin Attorney General Brad Schimel details the notorious “John Doe” investigations that went after almost every conservative, nonprofit organization in Wisconsin (the state chapter of Club for Growth among them) for supposed violations of campaign finance laws.

Except that there were not any actual violations of the law, according to the Wisconsin Supreme Court. The court shut down the prosecutions in 2015, calling the legal theory under which the prosecutors were pursuing the case “unsupported in either reason or law.”

The state’s highest court used the word “amazing” in describing the “breadth” of documents seized by prosecutors through numerous, wide-ranging subpoenas and search warrants. This included “virtually every document possessed by the [targets] relating to every aspect of their lives, both personal and professional, over a five-year span.”

The report from Schimel, a Republican, has an unbelievable list of 218 subpoenas and search warrants issued in the investigation—and this is only a “partial” list.

Prosecutors treated conservative organizations as if they were dangerous drug cartels or mob operations. As the Wisconsin Supreme Court said, they executed search warrants against the personal homes and families of the leaders of these nonprofits in “pre-dawn, armed, paramilitary-style raids in which bright floodlights were used to illuminate the targets’ homes.”

Here is the meritless theory behind the investigations: Any support for issues important to Gov. Scott Walker, such as the bill reducing union power over state government employees, was illegal “coordination.”

As the state Supreme Court said, however, our democracy is supposed to assure the “unfettered interchange of ideas for the bringing about of political and social changes desired by the people.” Instead, the prosecutors’ theories “would assure that such political speech will be investigated with paramilitary-style home invasions conducted in the pre-dawn hours and then prosecuted and punished.”

These investigations tried to criminalize political speech and political activity protected by the First Amendment.

As this writer previously reported, the motive of Chisholm, a Democrat, was apparently very personal: His wife was a steward for the teachers union at a local high school and was upset over the union bill sponsored by Walker, a Republican.

The accountability board, known as GAB, was broken up into two separate agencies by the Wisconsin Legislature after this debacle, and its former longtime director, Kevin Kennedy, the chief miscreant behind this abusive behavior, retired. Kennedy was part of the state’s elections bureaucracy for nearly 40 years.

Until this report, we only knew about two John Doe investigations. Amazingly enough, however, Schimel’s investigators discovered a third and secret case, not revealed by bureaucrats, when they searched the former offices of the accountability board.

What Schimel labeled as “John Doe III” went even further that the John Doe I and John Doe II investigations. According to his report, it “collected hundreds of thousands of private emails from dozens of Wisconsin Republicans (and at least two national conservative leaders, Ed Gillespie and Leonard Leo).” Gillespie, a Republican, just lost the governor’s race in Virginia; Leo is executive vice president of the Federalist Society, the conservative legal group.

The John Doe III investigation gathered over 500,000 personal emails, which the report says were found in “unsecured boxes” in the basement of the board’s former offices. Thousands of private emails from Wisconsin Republicans also were found in several folders on computer servers marked “Opposition Research,” the report says.

In other words, the state agency that was supposed to be the nonpartisan regulator of elections and ethics in Wisconsin was staffed by bureaucrats who labeled Republican legislators as the “opposition” and saw nothing wrong with using the legal process to secretly obtain their personal email communications.

DOJ found no evidence that may have supported a search warrant or subpoena into the dozens of Wisconsin and national Republicans targeted by the former GAB. (2/3)

How personal were these emails, and how far removed were they from having anything to do with elections, campaigning, or fundraising?

Schimel details some of the emails his investigators found on pages 67 and 68 of his report. They include over 1,000 emails among members of a private Bible study group that met at a church in Middleton, Wisconsin; an email between parents discussing a daughter’s need for an OB-GYN; an email about prescription medications; and “dozens of emails sent to, received from, or regarding radio talk show hosts Mark Belling, Vicki McKenna, and Charlie Sykes.”

That means that emails from this writer, a guest numerous times on McKenna’s radio show, very well may be in this collection. A leading conservative voice in Wisconsin, McKenna went after the Government Accountability Board and its abusive tactics in the John Doe investigations.

These emails were found in one of the folders marked as “Opposition Research.” Vukmir plans to challenge U.S. Sen. Tammy Baldwin, a Democrat, next year.

Leaks to the press by individuals involved in the John Doe investigations sparked Schimel’s probe.

When the courts ruled against the prosecutors, they issued orders that the prosecutors and bureaucrats no longer could review, examine, or access any of the documents they had seized. The Wisconsin Supreme Court later ordered all of the information destroyed and all seized property returned to its owners.

Despite those orders, the London-based Guardian newspaper published an article in 2016 linking to 1,500 pages of documents under seal from the John Doe investigations. The leak occurred just 11 days before the U.S. Supreme Court was set to consider the prosecutors’ petition for it to overturn the Wisconsin Supreme Court’s decision ending the prosecution.

Schimel’s extensive investigation concluded that the leak, a criminal violation of the law, came from inside the Government Accountability Board. From the particular documents leaked and the timing, it was clear to the state attorney general that the motivation was to attempt to influence the U.S. Supreme Court’s decision. The high court, though, ultimately refused to take up the case.

Schimel notes that “only someone with an intimate knowledge of the case, a knowledge of campaign finance law, and familiarity with the leaked documents would know which documents to leak that would respond directly” to issues raised in the petition seeking review by the U.S. Supreme Court.

Schimel also was able to determine the leak did not come from the Wisconsin courts or any of the district attorneys. The source was the accountability board, but that agency so mismanaged—through incompetence or intentional conduct—the handling of all of the documents in an unsecured, unmonitored setting that Schimel could not determine the leaker’s identity with the amount of proof required to win a criminal conviction.

The evidence, however, seems to point to Shane Falk, a former attorney at the accountability board. In his report, Schimel recommends action against a long list of individuals, including referring Falk to the Wisconsin Office of Lawyer Regulation, which oversees the licensing of lawyers and disciplines those who violate ethics rules.

Schimel also recommends initiation of contempt proceedings against nine individuals for violating various court orders issued by the Wisconsin Supreme Court and the lower courts, including for leaving “hundreds of thousands of confidential documents” in the basement of the former board offices “in violation of a Supreme Court order.”

Among the nine are employees, lawyers, and investigators of both the Government Accountability Board and the Milwaukee District Attorney’s Office, as well as the special prosecutor hired to help run the case—Francis Schmitz, a former U.S. Justice Department lawyer.

AG investigation did not discover why former GAB targeted these Republicans, other than they were investigated simply for being Republicans involved in campaigns following Walker’s victories in 2010 and 2012. No evidence of any illegal conduct on the part of Republicans. (3/3)

Kennedy, the former head of the accountability board, also is on this list. To its great shame, the National Association of State Election Directors last year gave Kennedy an award despite all of the evidence of his wrongdoing and misbehavior in the John Doe investigations. The fact that Kennedy now is on the board of the U.S. Vote Foundation, a nonprofit voting rights organization, tells you everything you need to know about that entity.

Here is the bottom line, according to Wisconsin’s attorney general, after his review of the evidence in the case, including emails exchanged between prosecutors and Government Accountability Board lawyers:

GAB attorneys had prejudged the guilt of Governor Walker, Wisconsin Republicans, and related organizations that they were investigating and this dramatically influenced their ability to give competent legal advice.

GAB attorneys did not act in a detached and professional manner … they were on a mission to bring down the Walker campaign and the governor himself. … Because the attorneys for GAB (none of whom were experienced criminal prosecutors) prejudged the evidence and what it meant, they had difficulty accepting that their interpretation of the law was wrong.

The Government Accountability Board’s attorneys refused to accept the legitimacy of court rulings against them, too, labeling the rulings as a “bad joke” and “pathetic” and indulging in conspiracy paranoia. One of the board’s lawyers, commenting on an adverse ruling, said: “I’m not a conspiracy theorist by nature, but something does not smell right here.”

In his report, Schimel writes that the

words and actions by individuals supposedly part of a ‘non-partisan’ governmental body demonstrate … that some or all of these individuals did not maintain the kind of objectivity that is expected of officials legitimately investigating potential civil campaign law violations. Indeed, it is to the Legislature’s credit that it disbanded GAB following this sordid tale.

This “sordid tale” of government spying on private individuals is a stain on Wisconsin’s reputation. It should serve as a warning to the public about the dangers of out-of-control, unaccountable government bureaucrats who abuse their power and threaten Americans’ freedom to participate in the political process.