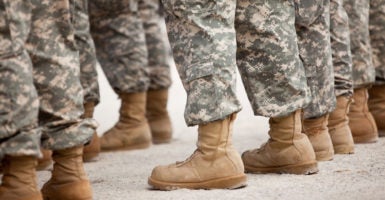 Asked point-blank, almost 60 percent of active-duty military held a negative opinion of the decision to allow troops who label themselves as transgender to serve openly. (Photo: iStock Photos)

Do you remember voting for Colleen Kollar-Kotelly in the presidential election? Neither does anyone else. But somehow the local district judge thinks she should be able to do President Donald Trump’s job.

In another ruling that not only exposes her incredible liberal bent, but the bigger battle with the out-of-control judiciary, Kollar-Kotelly is turning down the administration’s request for more time in dealing with the military’s transgender question.

Instead, she’s holding the new administration to the old one’s radicalism, insisting that the Defense Department open its doors to people confused about their gender as early as Jan. 1.

Back in October, the U.S. District Court judge for the District of Columbia made it clear that she’s no fan of the Constitution’s separation of powers, unilaterally ordering the president to stand down in his push to return the military to good order. She single-handedly blocked Trump’s efforts to stop people who identify as transgender from serving in the military, despite the reams of research showing its negative effects on troop morale, readiness, and resources.

The Family Research Council’s Peter Sprigg, who calculated that taxpayers would be staring down a $3.7 billion tab for President Barack Obama’s social engineering, could only shake his head at the court’s activism.

“The reason for this policy is not because the president or Defense Department doesn’t like transgender people. It’s because they have a unique medical condition which makes them [ineligible] for military service because they have limited deployability.”

Asked point-blank, almost 60 percent of active-duty military held a negative opinion of the decision to allow troops who label themselves as transgender to serve openly. More telling, more than half of that group said the policy change was having a terrible effect on military morale. In other words, it was unpopular, unproductive, and unreasonably expensive.

Is it any wonder that one year after Obama changed the policy, Trump changed it back? Like most Americans, he understands that the military’s job is to fight and win wars—not pander to a political agenda that weakens national security.

The president’s primary task is protecting Americans. Yet now we’re watching activist courts do everything from curb the executive branch’s power to telling the commander in chief how to run the military. And without the barest form of accountability to the same people who elected Trump.

“This type of judicial activism gives the court a self-conferred ‘veto’ of any presidential decision concerning the military the court simply thinks is unlawful,” the Family Research Council’s Travis Weber warns. “That’s not the way our constitutional order works.”

Not to mention, Trump has access to information, data, and intelligence reports that Kollar-Kotelly never will. If he thinks Obama’s policy will undermine national security, then it’s within his rights to declare as much.

Fortunately, the battle is far from over. Justice Department officials are already plotting their next move. “We disagree with the Court’s ruling and are currently evaluating the next steps.” One of which, Politico reports, is requesting an emergency stay on the ruling.

“Without this relief, the military will be forced to implement a significant change to its standards for the composition of the armed forces before it decides how to resolve this issue,” the government’s attorneys argue. “As military leadership has explained, this timetable will place extraordinary burdens on our armed forces and may harm military readiness.”

Trump understands better than anyone the threat this poses to our nation, and he told me as much Monday during our meeting at the White House. He isn’t backing down because one judge has decided to push a radical political agenda that has no basis in law.