Trump Can Use Liquefied Natural Gas to Bolster Key Alliances. Here’s How. 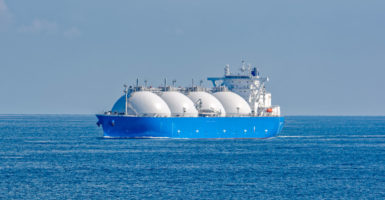 The Trump administration has spoken adamantly about U.S. energy dominance.

To outsiders, the phrase “energy dominance” may elicit fear and conjure images of Russian-like influence in using energy for political manipulation.

The reality in this case, however, is just the opposite: American energy dominance will help our allies break free from Russian dependence. By pursuing new energy export opportunities, the United States will reap both economic and geopolitical dividends.

In the past half-decade, the U.S. has become the world’s largest producer of natural gas. When combined with liquefaction technology, natural gas can easily be traded across oceans.

The United States has the opportunity to bolster security relationships in many regions with energy exports, including Asia, India, and Eastern Europe.

With access to energy being more secure for these allies, they will be less vulnerable to manipulation by countries such as Russia or Iran, two major suppliers of natural gas.

Japan and South Korea are two American allies and trading partners who share our democratic values, as well as our interest in limiting China’s power.

They are also both heavily dependent on foreign sources of energy. Japan supplies only about 6 percent of its own energy needs, forcing it to turn to other countries, many in the Middle East, to power its economy. Liquefied natural gas’ share of Japan’s energy supply increased to 44 percent in 2014.

South Korea is even more dependent on foreign sources than Japan, importing 98 percent of its needed energy supplies, and is the second-biggest importer of liquefied natural gas, behind Japan.

India is another key strategic partner of the United States, with a population increasingly dependent on foreign energy. Given that India is the fastest growing major economy, and poised to overtake China as the most populous nation in the next decade, its need for energy will only increase.

India also shares strategic concerns with the United States on issues, such as China’s growing power, as well as the need to keep open access for trade in the Indian Ocean. Consequently, the U.S. and India have been moving closer together over the past decade in our defense cooperation.

The opportunity to export U.S. liquefied natural gas to India would help buttress our strategic cooperation in two ways. First, it would provide a more reliable energy stream for a major strategic partner by decreasing India’s reliance on unstable and autocratic regimes, such as Iran’s. By extension, if India were no longer as dependent on Iranian gas, then India would be less affected by sanctions on Iran, and better positioned to push back again Tehran’s support for Islamist terrorism.

For instance, as noted in The Heritage Foundation’s 2018 Index of U.S. Military Strength, “a Lithuanian energy company signed an agreement to buy [liquefied natural gas] directly from the U.S.” in June.

U.S. liquefied natural gas exports are already having an important impact on lessening Russia’s control over Europe’s energy supply, which is good news for the U.S. and our allies.

As companies increase shipments abroad and grow their export capacity, Congress and the administration should remove the Department of Energy from the permitting process altogether, as the agency is an unnecessary obstacle.

Further, streamlining the Federal Energy Regulatory Commission’s review and permitting process and empowering the states to conduct the permits would create more efficient options for permitting, reducing the time frame in which American liquefied natural gas reaches the market.

Liquefied natural gas represents a unique opportunity to stimulate U.S. job growth, while bolstering our strategic position around the world.

Congress needs to pursue measures to further expedite the licensing of liquefied natural gas exports while diplomats and military planners examine the additional leverage that the U.S. and our allies will gain by being less dependent for energy on hostile regimes.