Our Special Operations Forces Are Stretched Too Far 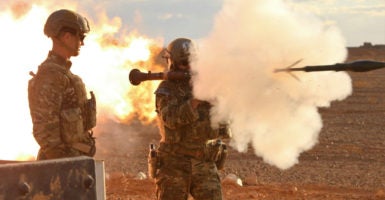 America is rightly proud of the incredibly capable and effective special operations forces that serve as the literal point of our military spear. The Army Rangers, Army Special Forces (Green Berets), Navy SEALs, Special Operations Aviation, and other elements are the best in the world.

No mission is too tough for these spectacular men and women, it seems. The question today is, do we love them too much?

Special operations forces, known in the military as SOF, led the way into Afghanistan and Iraq, and continue to play a leading role in both those theaters of conflict. They also fought a shadow war around the world in chasing down high-value terrorist targets outside the main areas of war.

As large-scale operations wound down, these forces returned to other tasks, at which they also excel.

They scattered around the world in over 80 countries (most of which are not terribly glamorous or safe) to train allied and partner militaries. The goal: giving those nations their own capabilities to fight the ever-metastasizing threats from al-Qaeda, the Islamic State (or ISIS), and other adversaries.

The 2011 strike in Pakistan to kill Osama bin Laden and the recent loss of four of these brave warriors in Niger are stark reminders of the dangers of all these missions.

As the bulk of the large, conventional parts of the military returned home, the contribution of special operations forces actually has expanded. The Obama administration was a huge advocate of these forces. Their effectiveness and low profile/low cost operations made them the forces of  choice.

The problem now is that the same personnel who have been “running hard” since Sept. 12, 2001, are still running. Some members of special operations forces have 10, 12, or more deployments under their belts since the war on terror began. They are tired, and their families are on a razor’s edge.

The leaders of the military services and U.S. Special Operations Command have been sounding the cry for relief for quite a while. Despite that, the missions keep coming.

Remember, you can’t just expand special operations forces. It takes years to develop troops of the quality and character needed. The only answer is backing off the operational tempo.

The military is trying. Leadership has made numerous efforts to spread the burden of the continuous requirements.

Creation of U.S. Marine Corps Forces Special Operations Command allowed more high quality troops to be utilized. The Army recently set up a Security Force Assistance Brigade designed to take up some overseas training missions normally done by Green Berets. These are excellent if controversial innovations, but they are not enough.

One of U.S. Special Operations Command’s “SOF Truths” is that you cannot create special operations forces after the crisis begins. More care has to be given to the specific missions we task them with. Those of the highest priority should be filled, others may have to wait or go to other types of units.

Everyone wants the best troops to do their task. But some of these will have to be addressed by elements that are still qualified and capable, though not at the top tier of the special operations forces structure.

A note here is warranted. In a tragedy that played out in June in the West African country of Mali, two members of SEAL Team 6 are suspected of killing a Green Beret sergeant because he had discovered they were stealing cash from their operational budget and would not “join in.”

If accurate, this was not an artifact of overwork; it was a failure of character. If these allegations are true, no one should brush off this horrendous act and give the perpetrators any sort of pass.

The bottom line is this: We are at a point where the very best we have will begin to die, to break down psychologically, or to have their families implode at rates higher than occur already. It is not acceptable for our leaders to allow that to happen.

These “rough men [and women] who are willing to do violence on our behalf” have given their all for the American people, and still are. The very least their leaders at the Defense Department, at the White House, and in Congress must do is to ensure their skills and experience are deployed only when the mission is truly critical.

The current mission load of our special operations forces should be reviewed and scrubbed to remove all tasks that are not essential to the vital national interests of America. The time of looking the other way is over.