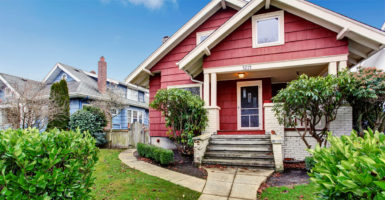 The House tax proposal would eliminate the estate tax after 2024, while the Senate would leave it intact. (Photo: iStock Photos)

Lawmakers are currently working out the differences between the House and Senate tax bills. On the estate tax—also known as the “death tax”—they should follow the House’s lead and fully repeal it.

Under current law, estates have to pay a 40 percent tax on any assets over $5.49 million per person (this amount is referred to as the “basic exclusion”). Both bills would double the amount of this basic exclusion.

The House bill, though, unlike the Senate bill, would fully repeal the estate tax, albeit not until after 2024. The Senate bill wouldn’t repeal the federal estate tax at all. Maintaining this tax, as the Senate would do, would squander a rare opportunity to put an end to this unjust and damaging tax.

Using the force of government to tax the hard-earned assets of people who have died is also immoral. Even worse, the federal government is taxing the same income twice, once when the income-earners are alive and again after they have died. Some defend the status quo by claiming that few estates have to actually pay the estate tax. That may be true, but it isn’t a policy argument against the merits of the tax.

If there’s a bad policy, the solution is to get rid of the policy, not to impose a widely recognized bad policy on fewer Americans. Moreover, it ignores all of the individuals that incur costs trying to avoid the estate tax.

Those who point to the small number of estates paying the estate tax are inadvertently helping to support another criticism of the estate tax: This tax exists despite the fact that it generates little revenue for the federal government, about half of 1 percent of total federal revenue.

Then, of course, is the class warfare argument that repealing the estate tax would just help the rich. Even if true, how does that justify this specific tax? Should individuals who have built small businesses and family farms be punished for their hard work and success?

There needs to be some context as to who really does pay the estate taxes. For example, in the agricultural context, according to the U.S. Department of Agriculture, 57 percent of the family farms that owed estates taxes were small family farms (gross cash farm income of less than $350,000).

Of course, these estates do have significant wealth. But this shouldn’t be confused with significant income.

Much of the wealth of these farms, and most family farms, is tied up in land. This means that when heirs do have to pay estate taxes, there is often a need to sell off land (or other assets) to pay off the death tax.

In trying to grow the economy and increase jobs, having a policy that compels businesses to contract is obviously counterproductive.

Imagine owning a small business and recognizing that if your assets exceed a specific level, a major tax could be triggered after you die. Your hope of passing on the fruits of your labor to your family could be severely hampered if you are too successful.

Such a tax is literally a disincentive to success.

The logical response is to take actions to avoid such a consequence. This might mean consuming your assets now as opposed to saving. It might mean deciding against growing a business, such as by investing in equipment or for that matter, investing in more people by creating jobs.

The estate tax distorts decision-making in a way that is counter to promoting economic prosperity, not just for the business owners but for the workers they would otherwise employ. If policymakers are going to “make American great again,” then they need to get rid of those policies that are the very antithesis of American principles.

Someone would be hard-pressed to find anything more un-American than the federal estate tax—a tax that rejects the idea of people building their American dream for themselves and for their families.