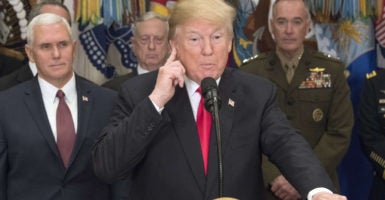 That directive, transmitted to the departments of Defense and Homeland Security, put to a halt the Obama administration’s June 2016 plan to allow transgender individuals to serve openly in the U.S. armed forces, beginning in July 2017 (but put on hold until Jan. 1, 2018, by Defense Secretary James Mattis).

If allowed to stand, Judge Colleen Kollar-Kotelly’s decision—coupled with similar Nov.  21 and Dec. 11 holdings in separate case by federal judges in Maryland and Seattle—would have enormous negative consequences.

It would mean that effective Jan. 1, 2018, the U.S. armed services would have to begin admitting transgender individuals, subject to certain guidelines. The armed services also (based on the ruling by the Maryland judge) would have to fund sex reassignment surgical procedures for military personnel—on the taxpayer’s dime.

As a legal matter, these federal court decisions are deficient. Judges have no business displacing the reasoned decision of the president, under his constitutional authority as commander-in-chief, to promote military readiness by establishing sound principles for eligibility to serve in the armed forces.

The lower court decisions acknowledge this presidential authority, but nevertheless claim that, by being prevented from serving in the military, transgender individuals would be denied “equal protection of the law” guaranteed by the Constitution.

But equal protection prohibits invidious discrimination based on immutable characteristics such as race—discrimination lacking any rational justification. It does not apply to rationally based noninvidious differentiation among classes of individuals needed to advance national goals, such as a strong military.

Rules denying military service opportunities to individuals who have serious medical problems (for example, heart disease, chronic asthma, or cancer) are not invidious discrimination—they are fully rational efforts to promote well-run and effective military services. Because individuals suffering from significant medical difficulties drive up costs and tend to impair combat effectiveness, it is perfectly rational to bar them from military recruitment.

These medical considerations apply directly to transgender individuals, who often must cope with serious physical and psychological problems. As Heritage Foundation scholar Thomas Spoehr, a retired three-star general, has explained, transgender individuals allowed into the military “would need medical treatments—hormone therapies and often surgeries and the accompanying recovery times—throughout the duration of their service.” Moreover:

Some studies report that transgender individuals attempt suicide and experience psychological distress at rates many times the U.S. national average. To be clear, this is self-reported data, not data gleaned from rigorously controlled, clinical tests. But at this time, these survey results are the best available data. It would be both irresponsible and immoral to place such individuals in a position where they are exposed to the additional extraordinary stresses and pressures of the battlefield.

In short, admitting transgender individuals into the armed forces, even with the best of intentions, is highly problematic.

As Trump’s Aug. 25 directive explained, the Obama administration “failed to identify a sufficient basis to conclude that terminating the [Defense and Homeland Security] Departments’ longstanding policy and practice [regarding transgender service] would not hinder military effectiveness and lethality, disrupt unit cohesion, or tax military resources[.]” Thus, Trump concluded that “there remain meaningful concerns that further study is needed to ensure that continued implementation of last year’s policy change would not have those negative effects.”

At a time when growing foreign threats are stretching our military’s resources, our priority should be on maintaining military readiness and directing taxpayer funds towards mission-critical purposes. Respecting the dignity of all people does not mean subjecting taxpayers to the tremendous medical costs of sex reassignment and allowing the enlistment of individuals whose resilience to the rigors of combat is uncertain.

Let us hope that the federal courts of appeal—and, if necessary, the Supreme Court—expeditiously reverse the lower court decisions and make it clear that the president has full authority to establish the terms, if any, under which transgender individuals are given (or denied) the opportunity to serve in the United States armed forces.