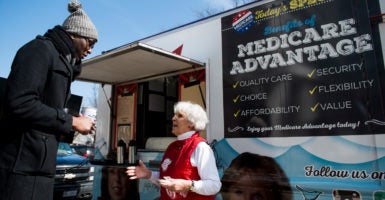 The clock is ticking for the return of an Obamacare tax that opponents say will hit older Americans on fixed incomes particularly hard, costing them an extra $500 per couple.

“For seniors on fixed incomes, my heavens, it’s a real problem,” @60PlusAssoc says.

Congress hasn’t taken action to delay or eliminate the tax before Jan. 1, when a moratorium on it expires. In 2015, Congress acted on a bipartisan basis to postpone the tax, which dates to President Barack Obama’s second year in office.

“It’s not just seniors, but clearly seniors are more financially strapped. And $500 per couple might not seem like a lot, but for seniors on fixed incomes, my heavens, it’s a real problem,” Jim Martin, chairman of the 60 Plus Association, a conservative organization for senior citizens, told The Daily Signal.

The estimated average of $500 per couple is based on an October study by Oliver Wyman Health, a health research firm that says the tax would mean a “$255 increase per Medicare Advantage member (including Special Needs Plans and Employer Group Waiver Plans).”

Medicare Advantage is a supplemental benefits program in which more than 100 private insurers compete for customers within the federal Medicare program. It covers about one-third of all Medicare beneficiaries.

The fee is a tax on health insurance companies, but the nonpartisan Congressional Budget Office projected the tax “would be largely passed through to consumers in the form of higher premiums for private coverage.”

“The bottom line is that HIT is a $12 billion tax annually on health insurance companies,” Martin said. “Guess what the companies are going to do? They’re going to pass it on.”

The 60 Plus Association launched a $500,000 TV ad campaign in November calling on Congress to block the Obamacare tax.

The tax collected $8 billion from insurers after going into effect in 2014. The tax doesn’t have a specific rate, but is set to grow every year based on the rate of growth in premiums. The Department of Health and Human Services sets the rate each year based on what it considers needed revenue.

Congress imposed the moratorium on the tax in 2015 to slow the rise in insurance premiums.

“It’s an excise tax with a twist that you’re raising a fixed amount of money, and therefore instead of the revenue from the tax varying, the tax rate varies,” Ed Haislmaier, a senior research fellow in health policy studies at The Heritage Foundation, told The Daily Signal.

So, it has this perverse effect, to the extent that fewer people buy insurance, the people that do buy insurance end up paying a higher rate.

Sen. Cory Gardner, R-Colo., who sponsored legislation to delay the tax for another year, spoke about it Wednesday to conservatives gathered in Washington at a meeting convened by Americans for Tax Reform.

In a formal statement after introducing the bill in September, Gardner said: “We need to look at every avenue we can to provide relief to the American people from the high costs created by the Affordable Care Act.”

Last month, Rep. Josh Gottheimer, D-N.J., touted his opposition to the coming tax in meeting with business owners in his district.

More than 20 percent of the health insurance tax falls on Medicare Advantage, according to the Better Medicare Alliance, an advocacy group for Medicare recipients.

“The HIT tax is applied to all private health insurance plans, but its impact on the senior population will affect those on a fixed income and [who have] less capacity to absorb higher taxes,” Robert Moffit, a senior fellow in health policy at The Heritage Foundation, told The Daily Signal. “This is another case where Obama misled the ordinary Americans on fixed income.”