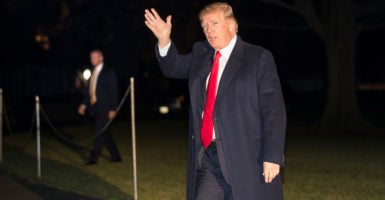 More black and Hispanic Americans are getting jobs on President Donald Trump’s watch, the latest employment numbers show, although critics accuse him of ignoring such minority populations.

The White House, not surprisingly, is happy to tout the results.

Unemployment among blacks declined from 8 percent one year ago to 7.3 percent in November, according to the Bureau of Labor Statistics. Blacks’ labor force participation rate rose slightly over the past year, from 61.9 percent in November 2016 to 62.2 percent last month.

Unemployment among Hispanics fell by a percentage point, from 5.7 percent to 4.7 percent, over the year. Hispanics’ labor force participation rate held steady, dipping from 65.7 percent to 65.6 percent.

While overall unemployment in November remained at a nearly 17-year low, the rate is also at historic lows among several groups, including Hispanics—where it is the lowest in at least 44 years—and African-Americans—where it is at its lowest levels since 2000.

The overall unemployment rate fell to 4.1 percent, a 17-year low. It was 3.6 percent among whites and 3 percent among Asians, about the same for both as a year ago.

“The Hispanic community is beginning to see the benefits of an improving economy. Lawmakers in Washington have a critical opportunity to deliver on tax reform that lowers rates, closes loopholes, and enhances competitiveness—which families and entrepreneurs are counting on,” Garza told The Daily Signal in an email statement, adding:

By locking these reforms in place for the long term, Congress and the president will help to ensure a stable environment that encourages greater economic opportunity and wage growth. Reducing the tax rate on American businesses to 20 percent—without creating new tax burdens—will be particularly helpful in ensuring the U.S. economy is competitive with those of our major trading partners, boosting the prospects of American workers and families. Hispanic families stand to gain a great deal if lawmakers deliver on these promises in the days ahead.

The economy has surpassed 3 percent growth for several months.

When President Barack Obama was in the White House, critics of candidate Trump said 3 percent growth would be impossible, noted Stephen Moore, an economist who is a distinguished visiting fellow at The Heritage Foundation.

“The left’s problem is that they said there is no way to grow the economy at 3 percent, and now they say it’s because of Obama,” Moore, who advised the Trump campaign on economics, told The Daily Signal. “Every economic indicator, with no exceptions, shows we are looking at forward growth. It’s very positive, and a dramatic improvement.”