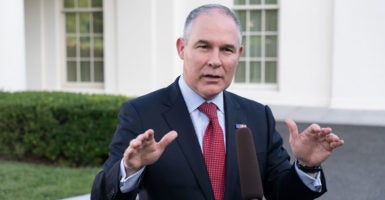 Last week, Pruitt joined Brooke Rollins, president and CEO of the Texas Public Policy Foundation, to talk about his goals since his time with the EPA.

Pruitt, who was at The Heritage Foundation’s “At the Crossroads IV: Energy and Climate Policy Summit,” said it’s been a “very eventful 10 or so months” working with the EPA.

Admitting he didn’t expect President Donald Trump to put him into his position as administrator, Pruitt said he believes there were two reasons why Trump was elected: because of his “courage” and because he is “a person of results and action.”

“He has put people in various capacities in the Cabinet that are focused on results and getting things done,” Pruitt said. “And we need a lot of that in Washington, D.C.”

Pruitt said the biggest issue facing economic growth right now isn’t tax reform—though he considers it necessary as well—but “regulatory uncertainty.” He said his department is focused on reviewing and reforming federal regulations on businesses implemented during the Obama administration.

“You’ve got agencies in the finance space,” Pruitt said. “With the [Consumer Financial Protection Bureau] as an example and the Dodd-Frank law and regulations that were issued under that statute, and in the energy and environmental space, our agency was the poster child for uncertainty in the marketplace by adopting regulations that were untethered to a statute.”

In the eight years under the Obama administration, Pruitt said Americans were taught that you can either have a pro-job or pro-environment society, but not both. He suggested that the private sector has done more to benefit the economy and nature than the federal government.

Pruitt also criticized the way government has treated individual state issues. He recommended that state-by-state environmental issues should be considered when taking action, otherwise ignoring each state’s input would be the equivalent of the U.S. “cutting [its] right arm off.”