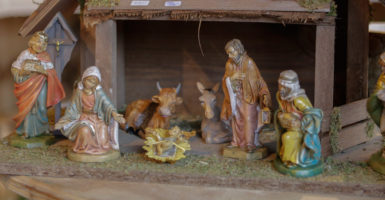 The Metro transit system in and around the nation's capital denied the Archdiocese of Washington's request to post an advertisement for its “Find the Perfect Gift” campaign, which directs people to a website to find a Christmas Mass to attend. (Photo: Michael Debets / Pacific Press/Newscom)

The Catholic archdiocese for the District of Columbia has filed legal action against the Washington Metropolitan Area Transit Authority after the church was unable to run a religious advertisement on the mass transit system.

The Archdiocese of Washington was denied access to post an advertisement for its annual “Find the Perfect Gift” campaign, which directs people to a website to help them find a Christmas Mass to attend.

“In 2015, WMATA changed its advertising policy to prohibit issue-oriented advertising, including political, religious, and advocacy advertising,” said Sherri Ly, media relations manager for the transit authority known as Metro. “The ad in question was declined because it is prohibited by WMATA’s current advertising guidelines.”

The Archdiocese of Washington responded to Metro’s rules on the same day it filed legal action, Nov. 28.

What is the #PerfectGift? God's love incarnate in the gift of his Son, Jesus. We invite you to Find the Perfect Gift this #Advent at https://t.co/nzmDpBfPJ6! pic.twitter.com/BzKbeVGtq6

“The rejected ad conveys a simple message of hope, and an invitation to participate in the Christmas season,” said Ed McFadden, secretary for communications for the Archdiocese of Washington. “Yet, citing its guidelines, WMATA’s legal counsel said the ad ‘depicts a religious scene and thus seeks to promote religion.’”

In the archdiocese’s legal complaint, the church states that Metro is a government-owned agency and its buses are public, so not allowing religious messages to be advertised goes against the Constitution.

The complaint references freedom of speech and free exercise of religion in the First Amendment, the federal Religious Freedom Restoration Act, equal protection, and due process as reasons for why the advertisement should be allowed.

The Religious Freedom Restoration Act of 1993:

Prohibits any agency, department, or official of the United States or any state (the government) from substantially burdening a person’s exercise of religion even if the burden results from a rule of general applicability, except that the government may burden a person’s exercise of religion only if it demonstrates that application of the burden to the person: (1) furthers a compelling governmental interest; and (2) is the least restrictive means of furthering that compelling governmental interest.

The complaint asks the federal court to not allow Metro to block the ad and to award the archdiocese the amount of money owed for its attorney fees and costs.

“We believe rejection of this ad to be a clear violation of fundamental free speech and a limitation on the exercise of our faith,” said Kim Fiorentino, the Archdiocese of Washington’s chancellor and general counsel. “We look forward to presenting our case to affirm the right of all to express such viewpoints in the public square.”

Chieko Noguchi, director of media and public relations for the Archdiocese of Washington, said the church advertised with Metro since 2006 regarding some of the church’s other campaigns, but that changed when WMATA implemented its new rules in 2015. The American Civil Liberties Union is also suing Metro because it took down ads for conservative provocateur Milo Yiannopoulos’ book after the transit system received complaints from customers earlier this year.

The Catholic Association, an organization that works to defend Catholic values, also chimed in on the controversy.

“The D.C. Metro authority has out-Scrooged itself,” said Ashley McGuire, a senior fellow at the Catholic Association.

“Christmas is a religious holiday, and the D.C. Metro is blatantly discriminating against Christians by rejecting the Archdiocese of Washington’s Christmas ad while allowing other Christmas ads that are purely about consumption and secular materialism,” McGuire said.

“Are they going to ban every ad that contains the word ‘Christmas’ since it contains a reference to Christ?”