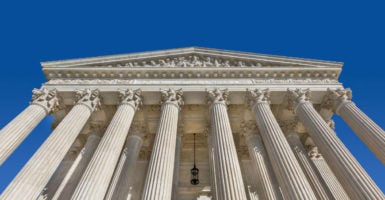 The Supreme Court heard oral arguments on Tuesday in what promises to be a landmark ruling on free speech and religious liberty. (Photo: iStock Photos)

The Supreme Court heard oral arguments Tuesday in Masterpiece Cakeshop v. Colorado Civil Rights Commission, a case over whether cake artist Jack Phillips can be forced by the state to design and create a cake celebrating a same-sex wedding in violation of his religious beliefs on marriage.

While justices directed heated comments and tough questions to both sides, the court’s skepticism fell heavily on the state of Colorado and the American Civil Liberties Union, who are representing the same-sex couple in the case.

The argument was fast-paced right out of the gate, with the justices struggling to speak over one another as they peppered Phillips’ attorney, Kristen Waggoner of Alliance Defending Freedom, with questions on the free speech claim.

Waggoner began to make the argument that Phillips’ artistic expression in baking custom wedding cakes is a form of speech, but the justices quickly interrupted to ask whether he would provide an “off-the-shelf” item to a same-sex couple. Waggoner replied that he would—he just didn’t want to be forced into designing a special cake to celebrate their ceremony.

Yet the justices struggled with where to draw the line on a question that is sure to arise again: How can the court protect not just the baker, but the florist, the wedding invitation designer, the makeup artist, the hairstylist, and the chef from First Amendment violations?

As the justices struggled to get their points across, it quickly became apparent the court was being confronted with a problem of its own making: In this post-Obergefell era, there are innumerable hypotheticals of potential religious objectors to same-sex marriage.

As Solicitor General Noel Francisco stepped up to continue the argument for Masterpiece, Justice Sonia Sotomayor showed her hostility to Phillips’ position, comparing his case with a gay couple being “left on the side of the highway.”

Such a myopic focus on the couple in light of this entire case shows that at minimum, she misunderstands Phillips as a person. If she understood what he believes, she wouldn’t think she needed to “compel [him] to like these people,” or eliminate “rudeness” while promoting “civility.” Phillips meets none of her mischaracterizations.

Phillips was courteous to the couple throughout the entire exchange. By contrast, Sotomayor failed to mention the incivility of the same-sex couple when they responded to Phillips after he declined to create their cake.

Such misapprehensions about the facts do no one a service.

The second half of the argument is where things really heated up. This portion focused much more on the issue of free exercise of religion.

Justice Anthony Kennedy, who expressed some concern in the first half of the argument about the impact of Phillips’ claims on nondiscrimination law, really came alive when peppering the attorneys for Colorado and the ACLU on a number of points.

Kennedy seemed particularly bothered by a commissioner’s statement claiming that what Phillips had done was “despicable,” calling this “hostility to religion.” He lectured the state: “Counselor, tolerance is essential in a free society. And tolerance is most meaningful when it’s mutual. It seems to me that the state in its position here has been neither tolerant nor respectful of Mr. Phillips’ religious beliefs.”

While the state’s attorney expressly disavowed that statement at argument yesterday, it may not be enough. Kennedy asked, in light of that disavowal, “Could your judgment stand?”

But he wasn’t finished. He also probed, along with Justice Neil Gorsuch (who observed that a second commissioner had expressed animus against Phillips) as to why the state should be able to force Phillips to “teach … to his family” that the state thinks his beliefs are discriminatory.

Finally, when ACLU attorney David Cole tried to claim that Phillips had declined service to the gay couple because of their “identity” and not the message inherent to the cake, Kennedy called this distinction “facile.”

The other justices picked apart the problems with the state’s argument in their own way. When Chief Justice John Roberts asked if a group of Catholic lawyers offering pro-bono legal services should be forced to take cases related to weddings for same-sex couples, the state’s attorney said they should, setting an ominous tone for religious freedom.

Justice Samuel Alito also hammered the state, asking why it let bakers who declined service to customers who wanted other messages off the hook, yet sought to punish Phillips for declining involvement in a same-sex wedding in 2012. At that point in time, same-sex marriage was still unlawful in Colorado and the state itself would not have recognized such a wedding.

Even Justice Stephen Breyer asked Colorado how it thought it should protect religious freedom in this scenario.

When Roberts remarked that this court in Obergefell v. Hodges observed that people are free to maintain their religious beliefs about marriage, Cole moved the goalposts, claiming this aspect of Obergefell only protects pure speech and doesn’t apply to Phillips’ actions here.

Cole also admitted he would force religious schools to violate their beliefs on same-sex marriage, the very thing that former Solicitor General Donald Verrilli hinted at during oral argument in Obergefell.

There is no doubt that at oral argument Tuesday, the ACLU and the state of Colorado sought to turn back the clock on religious freedom. If they had their way, they would force Phillips to proclaim “God blesses this union” on every wedding cake he makes, including for same-sex couples in violation of his conscience, should he want to proclaim that message on any cake at all.

Thankfully, not every justice was so callous toward Phillips and his plight. Let us hope that is reflected in a ruling in favor of Phillips and the First Amendment.