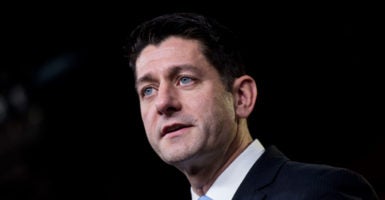 The House passed legislation Wednesday that will allow people with a concealed carry permit to also bring their guns across state lines in states that permit concealed carry.

“Today, the House took action to protect our citizens’ Second Amendment rights,” said House Speaker Paul Ryan, R-Wis., in a statement. “The truth is that concealed carry laws save lives. Right now, current law creates confusion for people who cross state borders with a lawful concealed carry permit. The legislation passed by the House today ensures that people who carry their legal firearm across state borders are protected under the law.”

“My bill is a simple, common sense solution to the confusing hodgepodge of concealed carry reciprocity agreements between states,” said Rep. Richard Hudson, R-N.C., the sponsor of the bill, in a statement last week. “It will affirm that law-abiding citizens who are qualified to carry concealed in one state can also carry in other states that allow residents to do so.

The final vote was 231-198, largely along party lines. Fourteen Republicans voted against the bill, which included a measure to strengthen background checks, and six Democrats voted for the bill.

This bill was passed through the House committee along with the Fix NICS Act, which will aim to provide more accurate data collection under the National Instant Criminal Background Check System.

“I know we can’t stop this bill,” Rep. Louise Slaughter, D-N.Y., said. “I know this is going to pass, there is no question about it, and we will add that to this litany of things about what you’re doing to the tax bill and now we’re all going to shoot each other.”

“This is not the Congress I’ve known and loved so many years but it’s the one we got,” Slaughter added.

Rep. Slaughter on Concealed Carry: It Will Pass And ‘Now We Are All Going To Shoot Each Other’

“I know this is going to pass, there is no question about it and we will add that to this litany of things to what you’re doing to the tax bill and now we’re all going to shoot each other.”

Meanwhile, the National Rifle Association was grateful for the progress the Concealed Carry Reciprocity Act has made.

“Concealed carry reciprocity is the NRA’s highest legislative priority in Congress,” wrote the NRA in a press release on Nov. 27. “It would ensure that states recognize the concealed carry credentials of other states. This would end abuses in anti-gun states like New York and New Jersey and allow law-abiding concealed carriers to exercise their rights nationwide with peace of mind.”