The Differences House, Senate Will Have to Resolve to Advance Tax Reform Bill 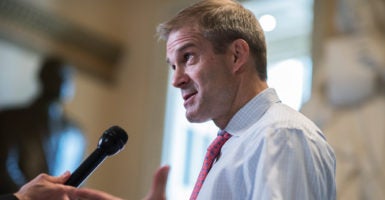 "My hope is that we take the best elements of both bills,” says Rep. Jim Jordan, R-Ohio, who praised the Senate’s repeal of the Obamacare individual mandate. (Photo: Tom Williams/CQ Roll Call/Newscom)

Following the Senate’s 51-49 early Saturday morning vote to pass Republicans’ tax reform overhaul, the legislation will move to conference where the House and Senate will work to resolve their differences.

“I think the differences are pretty minor between the two bills and I think will be pretty easily worked out,” Rep. Andy Harris, R-Md., told The Daily Signal in a phone interview.

A senior Republican aide told The Daily Signal in a phone interview that he expects the conference period will be swift, and said he believes a final vote on the plan will be “within one or two days” of the conference report. The Dec. 12 Alabama special election between Republican Roy Moore and Democrat Doug Jones is also creating pressure for a swift resolution.

Here are some issues that will likely be tackled in conference.

The current Senate bill will end most individual income tax cuts after 2025, and the Republican Study Committee wants to improve the bill by making the cuts permanent.

We’re either going to reform the tax code and have tax cuts and help the economy, or we are not. So I would hope that we are actually going to do this, make it permanent, and force Democrats in the future to raise taxes after we have lowered them. We should not be raising taxes back ourselves.

Senate Delayal of Corporate Tax Rates for a Year

Under the Senate bill, the corporate tax cut from the current 35 percent rate to 20 percent will not go into effect until 2019. Some lawmakers want to make the cut apply sooner.

“One big issue to think about is the delayed … date of the corporate tax rate reduction in the Senate plan,” Rep. Andy Biggs, R-Ariz., told The Daily Signal in a phone interview. “I think that members of the House want to see that immediately, because we think that is good for the country, good for the economy.”

“One of the negatives of the Senate bill is that it delays the implementation of the corporate tax cut, I think that should happen right away,” Jordan said in an interview with The Daily Signal.

Rep. Matt Gaetz, R-Fla., said Americans may miss out on the full potential effects of tax reform if the cut in the corporate rate is delayed.

“I would like to see these tax cuts retroactive, so certainly delays do not comport with my view on the subject,” Gaetz told The Daily Signal in a phone interview. “A lot of the growth that the president is rightfully taking credit for is anticipatory, and so if we delay the corporate tax cuts … the sugar high of market expectation may wear off before the caffeine of actual tax cuts can take hold, and that is a doldrum Republicans don’t want to be in, we don’t want the country to be in this doldrum.”

Rep. Dave Brat, R-Va., told The Daily Signal in an interview that “the tax cuts are already baked in the cake and markets are expecting it.”

“So I don’t think we can afford to delay any of these tax cuts and we ought to fight like crazy to lower the rates … the rest of it you can haggle and compromise, etc.,” Brat added. “But that’s the biggie.”

The House tax plan repeals the alternative minimum tax, which “requires many taxpayers to calculate their liability twice—once under the rules for the regular income tax and once under the AMT rules—and then pay the higher amount,” according to the Tax Policy Center.

Gohmert says the Senate should follow the House’s example in repealing the alternative minimum tax.

“That was a promise that Republicans have been making, that we’ll get rid of the alternative minimum tax so that people can know what they are going to be taxed in advance,” Gohmert said, adding:

You make so much, you’ll pay so much and not have an alternative jump in as you are doing your tax returns and tell you, ‘Nope, you are going to pay much more than you thought you were going to pay.’ So we’ve got to get rid of the AMT, both House and Senate have been promising that for a long time, it’s time to make good on the promise.

The House tax bill includes a repeal of the Johnson Amendment, a provision that was added to the tax code in 1954 that keeps churches from endorsing or opposing political candidates, as The Daily Signal previously reported. Some lawmakers have expressed support to include a repeal of the amendment in the final bill.

The Senate bill does not include a repeal of the Johnson Amendment.

“One of the promises made by candidate Trump was to deal with the Johnson Amendment which has been used to threaten churches and religious leaders from speaking on political matters for too long,” David Christensen, vice president of government affairs at the Family Research Council, said in a statement provided to The Daily Signal in an email, adding:

We believe the White House and Congressional leaders are committed to restoring the free speech rights of churches and nonprofits and we are cautiously optimistic this will be included in the final version of the Tax Cuts and Jobs Act.

The Senate version of the tax bill includes the repeal of the individual Obamacare mandate and a senior Republican aide told The Daily Signal in a phone interview that he expects it won’t be a “big deal.”

Jordan praised the inclusion of the repeal of the individual mandate.

“My hope is that we take the best elements of both bills,” Jordan told The Daily Signal in phone interview. “For example, the Senate bill has repealed the individual mandate, I hope that stays in the final package. I think it will.”

Following the Senate’s passage of the bill, the office of Senate Majority Leader Mitch McConnell, R-Ky., released an updated list of 229 businesses and other groups that are backing the legislation.

President Donald Trump, who has said he wants to sign a bill by Christmas, says he is confident the legislation will spur economic growth.

With the great vote on Cutting Taxes, this could be a big day for the Stock Market – and YOU!