DACA Is Not What the Democrats Say It Is. Here Are the Facts. 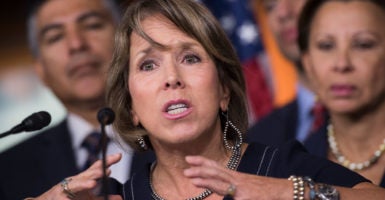 Responsible members of Congress should not give in.

Such an effort would be fundamentally flawed and would only encourage even more illegal immigration—just as the 1986 amnesty in the Immigration Reform and Control Act did.

Democrats portray the DACA program as only benefitting those who were a few years old when they came to the U.S. illegally, leaving them unable to speak their native language and ignorant of their countries’ cultural norms. Therefore, the reasoning goes, it would be a hardship to return them to the countries where they were born.

Obama himself gave this rationale when he said DACA beneficiaries were “brought to this country by their parents” as infants and face “deportation to a country that [they] know nothing about, with a language” they don’t even speak.

While this may be true of a small portion of the DACA population, it certainly is not true of all of the aliens who received administrative amnesty. In fact, illegal aliens were eligible as long as they came to the U.S. before their 16th birthday and were under the age of 31 as of June 15, 2012.

DACA also required that beneficiaries enroll in school, graduate from high school, obtain a GED certificate, or receive an honorable discharge from the military; have no conviction for a felony, significant misdemeanor, or three or more other misdemeanors; and not pose a threat to national security or public safety.

However, the Obama administration appeared to routinely waive the education (or its equivalent) requirement as long as the illegal alien was enrolled in some kind of program. Only 49 percent of DACA beneficiaries have a high school education—despite the fact that a majority of them are adults.

>>> Why Congress Should Not Legalize DACA: The Myths Surrounding the Program

In fact, based on documents obtained by Judicial Watch, it is apparent that the Obama administration used a “lean and light” system of background checks in which only a few, randomly selected DACA applicants were ever actually vetted.

Additionally, DACA only excluded individuals for convictions. Thus, even if a Homeland Security background investigation—which apparently was almost never done—produced substantial evidence that an illegal alien might have committed multiple crimes, the alien would still be eligible for DACA unless Homeland Security referred the violation to state or federal prosecutors and the alien was convicted.

DACA had no requirement of English fluency either. In fact, the original application requested applicants to answer whether the form had been “read” to the alien by a translator “in a language in which [the applicant is] fluent.”

This is a far cry from the image of DACA beneficiaries as all children who don’t speak the language of—and know nothing about the culture of—their native countries.

In fact, it seems rather that a significant percentage of DACA beneficiaries may have serious limitations in their education, experience, and English fluency that negatively affected their ability to function in American society.

Providing amnesty to low-skilled, low-educated aliens with marginal English language ability would impose large fiscal costs on American taxpayers resulting from increased government payouts and benefits, and would be unfair to legal immigrants who obeyed the law to come here.

Any congressional amnesty bill providing citizenship for DACA beneficiaries could significantly increase the number of illegal aliens who will benefit unless Congress amends the sponsorship rules under federal immigration law. Providing lawful status to millions of so-called “Dreamers” will allow the extended families of those aliens to profit from illegal conduct.

The average immigrant has sponsored 3.45 additional immigrants, but for DACA beneficiaries, that number is likely to be much higher. This is because, according to an analysis by the Department of Homeland Security, 76 percent of the DACA beneficiaries were from Mexico. Mexican immigrants sponsor an average of 6.38 additional legal immigrants—the highest rate of any nationality for chain migration.

Providing amnesty would simply attract even more illegal immigration and would not solve the myriad of enforcement problems we have along our borders and in the interior of the country. Congress should concentrate on giving the federal government (with the assistance and help of state and local governments) the resources to enforce existing immigration laws to reduce the illegal alien population in the U.S. and stem entry into the country.

Until those goals are accomplished, it is premature to even consider any DACA-type bill.