In 1 Chart, the Differences Between the House and Senate Tax Reform Bills 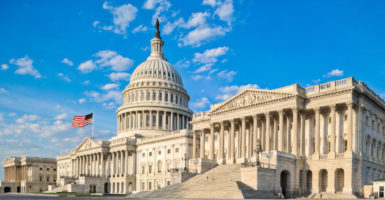 The Senate passed its version of tax reform by a vote of 51-49 early Saturday morning. (Photo: iStock Photos)

The House and Senate have now each passed different versions of Tax Cuts and Jobs Act.

Both bills are a big improvement to America’s out-of-date tax code and could boost the economy by almost 3 percent, leading to more jobs and higher wages for working Americans.

Both bills cut taxes for individuals and businesses, largely repeal the state and local tax deduction, and allow businesses to invest more in the American economy through temporary expensing.

The bills now head to a conference committee where a unified bill will be crafted. Here are some of the major differences you need to know about:

In addition to these differences, the House bill repeals or scales back many credits and deductions that are largely left intact by the Senate.

The conference committee has a tough, but doable, job ahead of it. It has the opportunity to borrow the best components of each bill to further enhance the proposed reforms’ benefits for all Americans.