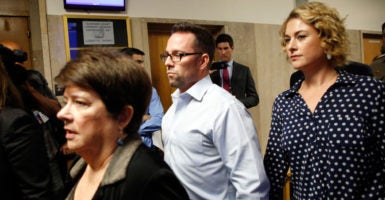 The family of Kate Steinle, including her mother Liz Sullivan, left, brother Brad Steinle and sister in law Amy Steinle enter the courthouse at the San Francisco Hall of Justice in San Francisco, California, on Monday, Oct. 23, 2017. (Photo: Laura A. Oda/TNS/Newscom)

San Francisco, being the proud “sanctuary city” for illegal aliens that it is, will no doubt roll out the welcome wagon for Jose Ines Garcia Zarate the next time he sneaks back into the country.

And it’s a near-certainty that he will, after he’s deported to Mexico for a sixth time following his acquittal Thursday by a San Francisco jury in the fatal shooting of Kate Steinle on July 1, 2015, on a pier on the city’s waterfront.

The needless death of the 32-year-old Steinle has rightly become, in criminal justice parlance, “Exhibit A” for the need for President Donald Trump’s proposed measures to strengthen border security.

Thursday’s grotesque miscarriage of justice also should underscore the need for Senate Democrats to drop their callous, politically motivated opposition to Kate’s Law.

Kate’s Law, H.R. 3004, approved 257-157 by the House on June 29, stipulates that an illegal alien who has been deported “three or more times and thereafter enters, attempts to enter, or crosses or attempts to cross the border to, or is at any time found in, the United States shall be fined, imprisoned not more than 10 years, or both.”

In short, had something like Kate’s Law been the law of the land prior to July 2015, Steinle would be alive today, because Garcia Zarate would have been, not on the streets of San Francisco, but behind bars, where he belongs.

The career criminal had been released a scant two and a half months before the killing from the San Francisco County Jail, where he was being held on a marijuana charge, “despite a request from federal authorities that he be held for a sixth deportation,” The Washington Post reported.

But to the open-borders crowd—in and out of Congress, and on the jury, apparently—the death of a young woman whose life was snuffed out by someone who should not have been in the country in the first place is the price we must pay to be a “welcoming” society to the downtrodden masses only seeking a better life by sneaking into our country. We can’t allow a little thing like national sovereignty stand in their way.

Only in San Francisco would a jury find Garcia Zarate, a five-times-deported illegal alien, with seven prior felony convictions, not guilty in the death of Steinle, even after he admitted to the crime.

The bullet pierced her aorta, and she died in her father’s arms. “Help me, Dad” were reportedly Steinle’s last words.

Garcia Zarate, 45, insisted that the shooting was accidental, but the San Francisco jury on Thursday wouldn’t even convict him of involuntary manslaughter. So, he will likely walk free, on time served for the relatively minor gun crime—being a felon in possession of a firearm—that the jurors did find him guilty of.

Jim Steinle, Kate’s dad, told the San Francisco Chronicle he was “saddened and shocked” by the verdict. “Justice was rendered, but it was not served.”

The verdict was arguably the most shameful example of willful jury nullification since the end of the O.J. Simpson murder trial in October 1995.

To be sure, Garcia Zarate will be deported again, but just as surely will sneak back into the country for a seventh time. While he walks free, Steinle’s parents are left without the daughter they loved—and, adding insult to injury, are denied the justice they deserved.

Just as an aside: Why are we not hearing “No justice, no peace,” the rallying cry of the perpetually aggrieved left? If ever there was a case where that sentiment was merited, this is it.

At the Republican National Convention in July 2016, a little more than a year after Steinle’s death, Trump vowed to crack down on San Francisco and other cities that provided “sanctuary” for illegal immigrants. “Where was the sanctuary for Kate Steinle?” he asked.

Trump, on Twitter, called Thursday’s verdict “disgraceful” and “a complete travesty of justice.”

“No wonder the people of our country are so angry with illegal immigration,” the president wrote, saying Democrats are “weak on crime.”

If Democrats want to prove the president wrong about that, there would be no better way of doing it than to end their shameful opposition to Kate’s Law. The Steinles deserve better.