Georgia Copyrighted Its Own Laws. Now, It’s Suing a Nonprofit Group for Publishing Them. 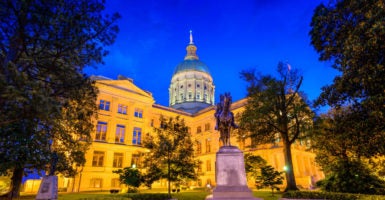 Georgia law makes it illegal to publish the state's official code for all to access free of charge. (Photo: iStock Photos)

The state of Georgia has one, and only one, official set of laws: the Official Code of Georgia Annotated.

There’s just one tiny problem for Georgia citizens who wish to know exactly what’s in the code: It will cost them hundreds of dollars to read it.

Why? Because Georgia copyrighted its own code and gave sole distribution rights to LexisNexis, a for-profit company. The state has since raked in tens of thousands of dollars’ worth of royalty fees every year, all for allowing its citizens the privilege of reading their own laws.

Worse, any good Samaritan wishing to distribute the state’s code for free should know that Georgia doesn’t take lightly to copyright infringement.

Take the example of Carl Malamud, who in 2013, working through his nonprofit organization Public Resource, purchased the entire set of Official Code of Georgia Annotated materials. He then uploaded scanned copies to his website, allowing the public free access without needing to purchase the $395 bound copy.

For this ghastly offense, Georgia sued him in federal court, calling his actions “a form of terrorism.”

Worse still, a federal district court recently agreed that Georgians do not have a right to freely access their own official legal code. It’s apparently enough that they can access the outdated and inaccurate unannotated code, which is not accepted as the state’s official law.

What the Federal District Court Held

The District Court for the Northern District of Georgia determined that Georgia possessed a valid copyright, that Malamud distributed protected elements of the copyrighted work, and that the so-called “fair use exception” did not apply.

The court gave great deference to the U.S. Copyright Office, which both granted Georgia the copyright and maintains that legal publications annotating or commenting upon legislation may be registered.

Despite acknowledging the Official Code of Georgia Annotated’s unusual status as Georgia’s only official legal code, the court found there was no difference between it and unofficial annotated codes whose copyrights were upheld.

Finally, the court refused to accept Malamud’s affirmative defense of “fair use.” The Fair Use Doctrine is outlined in the Copyright Act, and includes a four-factor analysis.

The court weighed three of the four factors against Malamud, including a determination that Public Resource, a nonprofit organization offering the code for free, nevertheless profited from the “attention, recognition, and contributions it received” due to the infringement.

The infringement was total in nature, and threatened to destroy the economic viability of publishing the code by severely limiting LexisNexis’s ability to recoup preparation costs.

The District Court Was Arguably Wrong

The district court arguably overlooked several important factors, many of which have been noted by the American Civil Liberties Union in a brief it filed with the 11th U.S. Circuit Court of Appeals.

Unlike other annotated legal publications registered by the Copyright Office, these annotations comprise Georgia’s only official legal code. This is not a supplementary text authored by a private entity, but the sole publication authorized by the state Legislature for promulgation of its laws.

The agreement between Georgia and LexisNexis explicitly “requires the official code to include not only the statutory provisions, but also annotations … and other materials.” Furthermore, Georgia—not LexisNexis—maintains the ultimate right of editorial control over the code, and the entire code becomes state property upon publication.

The state Legislature, in OCGA § 1-1-1, describes the code as including annotations, analyses, and other materials. In that same section, it decrees that the full body of the code is “published by authority of the state … and may be cited as the ‘Official Code of Georgia Annotated.’”

The free unannotated code even utilizes a disclaimer, stating that the Official Code of Georgia Annotated is the authoritative version that takes precedence over any discrepancies in the free version.

Despite attempts in OCGA § 1-1-7 to distinguish certain portions of the annotated code’s text as not “part of the law” that “shall in no manner limit or expand the construction of any code section,” the language is vague.

It’s with good reason that Georgia only recognizes the Official Code of Georgia Annotated as its official law: The unannotated code is an unreliable reference. The unannotated code often provides severely limited—and sometimes blatantly incorrect—information regarding what is or is not legal.

Only the full annotated code explains that certain statutes (like the crime of sodomy) are unconstitutional and unenforceable, and provides the dates of enforcement for recently enacted or amended statutes.

Only the full code references official interpretations that state courts have treated as authoritative on issues (Moore v. Ray), and that sometimes drastically affect which actions will be deemed illegal for purposes of prosecution.

For example, the unannotated code does not, in contrast to the official annotated code, inform a person that the Attorney General’s Office considers the unauthorized anchoring of boats in a state park to be criminal trespass, or that the prohibition on carrying a firearm at a public gathering does not apply to shopping malls.

Because the entirety of the official code constitutes “law” both in purpose and in practice, it cannot be copyrighted by the government. Since its 1834 holding in Wheaton v. Peters, the Supreme Court has made clear that allowing governments to copyright laws is “absurd.”

A similar attempt by Georgia to copyright its statutes was struck down in Georgia federal district court in 1982, with the judge citing Supreme Court Justice John Marshall Harlan’s 1898 statement concluding that “it cannot be doubted” that “no one can obtain the exclusive right to publish the laws of a state in a book prepared by him.”

Moreover, as the 5th U.S. Circuit Court of Appeals noted in Veeck v. Southern Building Code (2002), the Supreme Court has consistently “enunciate[d] the principle that ‘the law,’ whether it has its source in judicial opinions or statutes, ordinances or regulations, is not subject to federal copyright law.”

Further, multiple federal appellate courts have held that even materials drafted by private organizations enter the public domain once the state adopts them as official law. Here, not only were many code sections drafted by state entities, but the Legislature expressly enacted the code as the law of Georgia, without any caveats.

In short, the weight of copyright precedent supports the position that the official annotated code cannot be copyrighted. What’s more, effectively charging citizens hundreds of dollars to read the official legal code has serious due process implications.

A fundamental principle of due process is that “laws which regulate persons or entities must give fair notice of conduct that is forbidden or required,” and that “men of common intelligence” should not be left to guess at the law’s meaning or application.

Currently, Georgians must either pay large sums of money to acquire the code, or be left to guess at which statutes are enforceable, and to what degree and under what circumstances.

Pro se litigants (who represent themselves) in particular are deprived of their right to access the law, because any pleading they draft must cite the costly code, per state and federal court rules.

Even if Georgia could constitutionally prevent its citizens from having free access to the code, doing so is bad public policy. No self-respecting lawmaker should passively accept that his or her citizens cannot freely access the entirety of the code he or she was elected to enact.

States should be making it easier, not harder, for their citizens to know both what the law is and what it means.

Forcing the average Georgian to sift through barely-accessible legislative histories and tens of thousands of court opinions because they cannot afford to purchase the official legal code—where the information is already compiled—is a fundamentally flawed method of governance.

In the United States, the law derives its authority from the consent of the governed, expressed through the democratic process. Where the government hides the law from the public, it undermines the legitimacy of its enforcement power.

Georgia’s insistence on profiting from an abject disregard for whether its citizens can access the full breadth of the law is not only ethically repulsive, but undermines the just foundations on which that law rests.

It appears, unfortunately, that Georgia cares more about its annual royalty fees than it does about just governance.