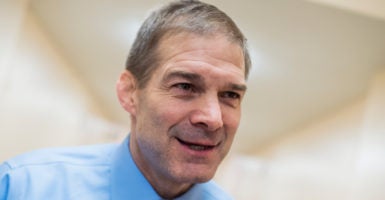 Rep. Jim Jordan, R-Ohio, says the best way to “put on pressure” to increase military spending is to offer his amendment to raise caps on defense spending from $549 billion to $634.2 billion. (Photo: Tom Williams/CQ Roll Call/Newscom)

With government funds running out Dec. 8, House conservatives argue that lawmakers should boost military spending in a new funding bill.

“We are breaking the caps on defense,” Rep. Jim Jordan, R-Ohio, said Thursday at Conversations with Conservatives, a monthly Q&A with reporters hosted by House conservatives and The Heritage Foundation.

Jordan, along with other conservatives, wants to raise the caps on military spending instituted by the Budget Control Act, passed in 2011. That legislation sought to curb government spending and control the growth of federal programs.

The Budget Control Act currently places caps on military spending for 2018 at $549 billion. Frederico Bartels, a policy analyst for defense budgeting at The Heritage Foundation, told The Daily Signal in an email that “the consensus is that they will be raised, but how and when still depends on the negotiations.”

Two and a half weeks ago, Jordan told reporters, Reps. Mark Meadows, R-N.C., and Scott Perry, R-Pa., joined him in unsuccessfully offering an amendment to the National Defense Authorization Act that would have undone the defense spending caps.

The amendment sought to raise the 2018 defense caps from $549 billion to $634.2 billion, Justin Bogie, Heritage’s senior policy analyst in fiscal affairs, said in an email to The Daily Signal.

Although the amendment failed, Jordan said, he will argue that any government funding legislation should include more defense spending.

“Go ahead and break the caps on defense at that level; obviously we are not there on [breaking caps on] nondefense. And again, that’s not what we campaigned on, that’s not what the voters elected us to do,” Jordan said.

“If you had to break the caps on something, military is something that I think we are all in agreement on, particularly [with] what is going on with North Korea and the actions they have taken, and I think this is a positive first step,” Norman said.

The current National Defense Authorization Act passed by Congress calls for $700 billion for defense spending, well above the amount allotted under the Budget Control Act.

“If Trump just signs the NDAA and they do not raise the [Budget Control Act] caps, it will trigger sequestration and every account, with the exception of personnel, will be cut by an equal percentage to reach the BCA-cap level,” Bartels said of Congress, adding:

For the defense budget to reach the $700 billion that Trump talks about, either the BCA caps need to be changed or they need to classify a lot of money as emergency spending and funnel it through [Overseas Contingency Operations], which is exempt from the BCA caps.

Overseas Contingency Operations is an account for emergency spending originally set up to pursue the global war on terror.

Jordan said he is committed to working to increase funds for national defense before the Dec. 8 deadline and following Senate Republicans’ vote on its tax reform bill, expected Friday.

>>> Podcast: What You Need to Know About the Upcoming Budget Deadline

Jordan said the best way to “put on pressure” to increase military spending is to offer his amendment to spending legislation to raise the defense caps from $549 billion to $634.2 billion.