As Vote Nears, Where GOP Senators Are on Tax Reform 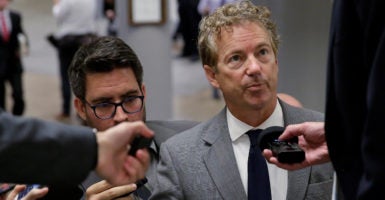 “I’m pleased to see us moving forward on a plan for tax cuts, and ... I hope to vote to pass such a cut in the coming weeks,” Sen. Rand Paul, R-Ky., wrote in an op-ed Monday. (Photo: Joshua Roberts/Reuters/Newscom)

With no Democrat senators signalling support for the tax reform bill and 51 votes needed to pass the measure, every Republican senator’s vote matters.

With the tax vote expected this week, it’s still unclear how many Republican senators support the legislation.

Sen. John McCain, R-Ariz., has not taken an official position on the Senate tax reform bill, Bloomberg reported, and Sen. Jerry Moran, R-Kan., has been ambiguous on his stance of the bill.

“The easiest way to say this is, I am for some tax bill. Can we find taxes to cut that grow the economy?” Moran said at a town hall in Clay Center, Kansas, according to The Topeka Capital-Journal.

Both Corker and Sen. Ron Johnson, R-Wis., however, voted to advance the Senate tax plan out of committee in the Senate Budget Committee vote Tuesday afternoon.

Yesterday, I voted to advance the #TaxReform legislation to the Senate floor for consideration. My full statement: pic.twitter.com/kdLgb26OJn

On Wednesday, Lankford announced his support of the bill in an interview with CBS News.

“Yes, I am on board with this bill. Because I want to see the good economic growth that is coming with it, but also because I want to protect future tax payers as well,” @SenatorLankford says pic.twitter.com/RrFHj5BMRg

Lankford, Corker, and Flake reportedly expressed concerns that the tax plan will add to the country’s deficit if the revenue predicted in the tax plan does not materialize. The Tax Foundation estimates that the Senate tax plan, “when fully implemented, would spur an additional $1.26 trillion in federal revenues from economic growth.” Corker had suggested that the tax legislation have a kind of trigger that would essentially reverse tax cuts if the projected revenues did not occur.

In an interview with Politico Playbook Wednesday, Sen. Marco Rubio, R-Fla., pushed back on the concerns that the tax bill would adversely affect the deficit.

“The argument would be we can cut taxes because it will drive up the deficit and that assumes that somehow we can fix the deficit through higher taxes and we can’t,” Rubio said.

“The only way you are going to deal with the debt is you have to do two things,” the Florida Republican said, adding:

And if we did that, in combination with [economic] growth, you can begin to bring the trajectory of debt to a responsible and respectable level. That is the only way forward, so I think tax reform is the economic growth component of it.

Collins expressed concerns Tuesday about the Obamacare repeal mandate being included in the Senate tax plan.

“If it is going to be included, it’s essential that we mitigate the impact on premiums,” Collins told Politico. “That includes passing the Alexander-Murray bill and also a bill that I have with [Florida Democrat Sen.] Bill Nelson that would protect people with pre-existing conditions, and yet lower premiums through the use of high-risk pools.”

During his interview with Politico, Rubio said including the mandate repeal is meant to help working Americans.

“If you look at the people who are being hurt the most by the individual mandate, it is the individual who is working and isn’t rich but makes $50,000 a year,” Rubio said, adding:

At $50,000 a year, if they don’t have health insurance from their employer, they make too much money for the subsidy, but the law requires them to buy it or they get penalized … they are the ones that get hurt and those are the people we want to focus on helping in this particular circumstance.

Sen. Rand Paul, R-Ky., who was thought to be a wild card on the tax reform plan, announced his support Monday in an op-ed.

“One of the main differences between Republicans and Democrats is that Republicans, in general, favor less government and more tax cuts,” wrote Paul in a Fox News column. “That’s why I’m pleased to see us moving forward on a plan for tax cuts, and why I hope to vote to pass such a cut in the coming weeks.”

Here's why I plan to vote for the Senate tax bill (and my colleagues should step up) https://t.co/RebAQZvnh0

Another senator who had been on the fence, Sen. Steve Daines, R-Mont., is now speaking more positively of the tax bill.

Johnson, who said Monday that the bill does not do enough to protect pass-through businesses, establishments that are “taxed on the business owner’s tax returns through the individual income tax code,” according to the Tax Foundation, has come to “yes,” according to Axios.

President Donald Trump has been outspoken about reforming the tax code in his first year in office and has said he wants to sign a bill by Christmas.

Departing @JBA_NAFW for St. Charles, Missouri to help push our plan for HISTORIC TAX CUTS across the finish line.

A successful vote in the Senate this week will bring us one giant step closer to delivering an incredible victory for the American people!https://t.co/jR1DEUnm2h pic.twitter.com/XF9sRwdV8u

Adam Michel, a tax policy analyst at The Heritage Foundation, says a tax overhaul is needed.

“The tax plans are not perfect, but Congress is working in a $1.5 trillion reconciliation box and every decision they make is a trade-off against some other priority,” Michel said. “Yes, businesses and many people will still face higher tax rates than they should, and further reductions to all tax rates must remain a congressional priority in 2018 and beyond.”