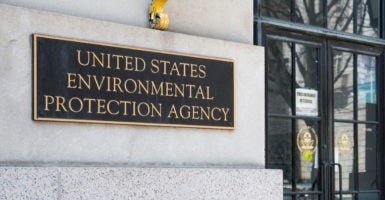 Judicial Watch obtained 900 pages of documents Monday showing the EPA used social media to lobby support for the Waters of the United States rule. The agency used Thunderclap, a platform that shares messages across Facebook and Twitter, to recruit outside groups to generate support for various environmental policies.

“I don’t want it to look like EPA used our own social media accounts to reach our support goal,” former EPA Director of Web Communications Jessica Orquina wrote in an email in 2014 to Karen Wirth, an EPA team leader in the Office of Ground Water and Drinking Water.

Judicial Watch obtained the email records through a Freedom of Information Act lawsuit after the EPA failed to respond to a FOIA request in May.

The covert campaign began when Travis Loop, the EPA’s director of communications for water, wrote in a Sept. 9, 2014, email to Gary Belan, senior director for the organization American Rivers, that the agency was pursuing a new strategy to defend the Waters of the United States rule from critics.

“EPA is planning to use a new social media application called Thunderclap to provide a way for people to show their support for clean water and the agency’s proposal to protect it,” Loop wrote at the time before explaining how the ploy works.

“If 500 or more people sign up to participate, the message will be posted on everyone’s walls and feeds at the same time. But if fewer than 500 sign up, nothing happens. So, it is important to both sign up and encourage others to do so,” he added.

Loop then contacted Orquina in a Sept. 10 email of that year to ask her how to rope other agencies into the scheme.

“What’s the best way to get the other agencies to sign up for the Thunderclap and promote on social media? Interior, USGS, NOAA, etc. I was going to tweet at them to join the Thunderclap, but thought maybe you had thoughts on that and maybe a more direct line,” he said.

Conservatives targeted the Waters of the United States rule during the presidential campaign, which ultimately led to current EPA Administrator Scott Pruitt announcing earlier in 2017 that the agency would repeal the clean water rule.

“We are taking significant action to return power to the states and provide regulatory certainty to our nation’s farmers and businesses,” Pruitt said in a statement at the time. He was acting upon order from President Donald Trump, who campaigned during the 2016 presidential election on nixing a slew of Obama-era environmental regulations.

Trump ordered the EPA to review the Waters of the United States rule in February and, if necessary, replace it with a rule that interprets the term “navigable waters” in a “manner consistent with the opinion of Justice Antonin Scalia in Rapanos v. United States.”

Late Supreme Court Justice Antonin Scalia, who died in 2016, wrote an opinion in 2016 arguing that navigable waters are large flowing bodies of water, not small creeks or ponds.

“The Obama EPA knowingly did an end run around federal law to push another Obama environmental power grab,” Judicial Watch President Tom Fitton said in a press statement Monday. “These documents show how these Obama-era bureaucrats seem to be more like social activists than public employees.”

Former Obama-era EPA officials did not respond to The Daily Caller News Foundation’s request for comment in time for publication.