Mulvaney Freezes Hiring Amid Fight for Control at the CFPB 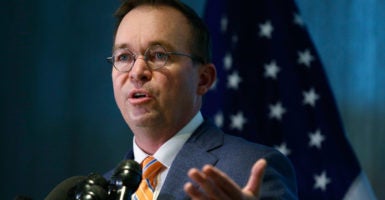 Office of Management and Budget Director Mick Mulvaney speaks to the media at the Consumer Financial Protection Bureau, where he began work earlier in the day after being named acting director by President Donald Trump in Washington, Nov. 27, 2017. (Photo: JOSHUA ROBERTS/REUTERS/Newscom)

Recently appointed acting Director of the Consumer Financial Protection Bureau Mick Mulvaney instituted a temporary hiring freeze at the Obama-era regulatory body Monday but denied charges that he plans to dismantle the agency.

The hiring freeze as well as a freeze on any new regulations or guidance will last for 30 days. Mulvaney’s first day on the job was rife with controversy regarding who is the rightful director. Former CFPB Director Richard Cordray appointed Deputy Director Leandra English to replace him, pre-empting President Donald Trump’s appointment of Mulvaney, director of the Office of Management and Budget.

Mulvaney’s appointment was met with recrimination by Democratic lawmakers and liberal activists, who cited his previous description of the agency he was selected to run as a “joke.” Mulvaney denied the charge that he would seek to cripple the agency.

“Rumors that I’m going to set the place on fire or blow it up or lock the doors are completely false,” Mulvaney told reporters during a briefing at the bureau’s headquarters Monday.

English filed a lawsuit against Mulvaney and Trump Sunday and asked that the court install her as acting director.

When asked about his agenda, Mulvaney echoed Trump’s sentiments, telling reporters he would make the agency more efficient while avoiding the political agenda that held sway under the Obama administration.

“It is a completely unaccountable agency, and I think that’s wrong,” he said. “If the law allowed this place not to exist, I’d sit down with the president to try to make the case that other agencies can do this job well, if not more effectively.”

“Anybody who thinks that a Trump administration CFPB would be the same as an Obama administration … CFPB is simply being naive. Elections have consequences at every agency, and that includes the CFPB,” he later added.