After Months of Inaction, Senate Republicans Must Seize Chance to Pass Tax Reform 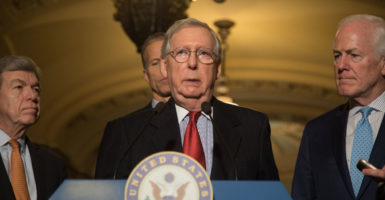 After nearly 11 months of careening from one disappointment to another, Congress is on the verge of a major breakthrough on tax reform.

I won’t begrudge you if you’re pessimistic, but past performance does not always indicate future results. And when it comes to the aptly named Tax Cuts and Jobs Act, there is reason for legitimate optimism.

Heritage Action for America intends to key vote in favor of the Senate proposal, as currently drafted, that has been ably constructed by the Senate Finance Committee with input from a broad spectrum of the Senate Republican Conference.

By now, the arguments in favor of the Tax Cuts and Jobs Act are familiar: tax cuts for most Americans, including a big win for the middle and working class; increased long-run gross domestic product by 2.8 percent with the potential for nearly 1 million new jobs; the elimination of the unfair and misguided state and local tax deduction; and the elimination of Obamacare’s draconian individual mandate.

As the Senate prepares to vote this week, there are a variety of small issues that could be tweaked or fine-tuned to make the bill even better. However, there are two broad issues that have the potential to delay or even grind legislative progress to a stop.

Most notably, a handful of senators are raising concerns about the impact of tax cuts on our nation’s $20 trillion debt. Even if you assume zero economic growth—a laughable assumption given that prominent economists believe these reforms could boost economic growth by 3 to 4 percent in the long run—the Senate bill would reduce federal tax confiscation by less than 3.5 percent over the next decade.

When economic growth is taken into account, that number shrinks dramatically. But the larger point is that the federal government cannot tax its way to fiscal responsibility.

Reining in profligate spending ranging from old-age entitlements and mandatory programs to hundred billion-dollar annual budget deals is the only way to restore fiscal sanity. Conservatives are eager to work with congressional deficit hawks to do just that, but the American people will be reluctant to go along until they feel economically secure in a way they have not since the Great Recession.

Another issue is the treatment of small businesses. As my Heritage Foundation colleague Adam Michel explained last week, small and pass-through businesses are not being left behind in the Senate’s tax reform proposal. Pass-through entities not only receive a rate cut, but most will be offered a 17.4 percent deduction.

Michel notes that “[a]round 86 percent of pass-through businesses are taxed at the new 24 percent rate, putting their effective tax rate after the deduction at 19.8 percent.”

We would love to see larger tax cuts, but the constraints imposed by the budget process and the aforementioned deficit hawks require trade-offs.

While not perfect, this bill most certainly represents what President Ronald Reagan would call “half a loaf.” Many politicians invoke our nation’s 40th president as an intellectually lazy crutch, but considering the last major reform of our tax code occurred at his behest, it’s worth considering his “half a loaf” comment in context:

I’m not retreating an inch from where I was. But I also recognize this: There are some people who would have you so stand on principle that if you don’t all that you’ve asked for from the legislature, why, you jump off the cliff with the flag flying.

I have always figured that half a loaf is better than none, and I know that in the democratic process you’re not going to always get everything you want. … [A] little delayed in starting, was better than going down fighting and not getting anything at all.

He made those comments in 1983, discussing the negotiations leading to the enactment of his 1981 tax cuts. Reagan also added, “I [can] come back and I ask for more the next time around.” And we know he did, multiple times, culminating in the 1986 tax reform package.

Republicans have had unified control of the federal government—the House, Senate, and White House—for only seven years since the 1930s. To say this is a once-in-a-generation opportunity is an understatement.

America cannot afford for congressional Republicans to miss this opportunity by careening down another legislative canyon.