Dumping Net Neutrality Is ‘Opposite of Authoritarianism,’ FCC Chief Says Amid Death Threats 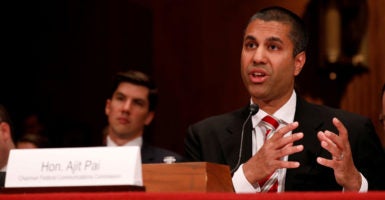 Ajit Pai, chairman of the Federal Communications Commission, testifies before a Senate Appropriations financial services and general government subcommittee in Washington on June 20. Pai is pushing a proposal to scrap the Obama-era federal regulation of the internet. (Photo: Aaron P. Bernstein/Reuters/Newscom)

Federal Communications Commission Chairman Ajit Pai, in defending his proposal to do away with his predecessor’s 2015 net neutrality policy, made a not-so-subtle reference to the personal threats against him and his family.

“Hysteria brings us to unpleasant and dangerous places,” @AjitPaiFCC says.

Going back to May, he said, many public comments about the FCC proposal have targeted him personally—some attacking his ethnic background, such as calling for him to be “deported” to India. More recently, signs were placed near his home telling his children: “Dad murdered democracy.”

Speaking Tuesday at the R Street Institute, a Washington think tank, Pai said numerous Hollywood celebrities have come out against scrapping net neutrality, or FCC regulation of internet service providers, including actress Alyssa Milano, who called its repeal a threat to democracy.

“I’m threatening democracy? Really?” Pai said to laughter from the audience. “I’d like to see the evidence that America’s democratic institutions were threatened by the rule that existed during the Clinton administration, during the Bush administration, through the first six years of the Obama administration. Don’t hold your breath, because there is none.”

He then referenced the threats.

“This reminds me of another point, one that has been brought home to me in the past few days. This debate in our culture and our public policy on this and other issues need quality information and not hysteria, because hysteria brings us to unpleasant and dangerous places,” the FCC chief said. “We can disagree on policy. That is the American way. We shouldn’t demonize, especially when all of us share the same goal of free and open internet.”

I have a friend that lives near @AjitPaiFCC. Net neutrality “activists” posted these signs, featuring his children’s names, outside his house. Pizzas also reportedly sent to his house every half-hour last night. pic.twitter.com/jWI4gV6Hvc

The FCC, during the Obama administration, imposed net neutrality rules to essentially regulate the internet as a utility, contending it will protect customers from internet service providers that would increase or decrease access to certain sites.

Pai and other Republicans contend the deregulated model that existed before 2015 allows the internet to thrive and meet consumer demand, and that outdated regulations harm consumers.

Pai also noted a claim, made on Twitter by actor Mark Ruffalo, best-known for his portrayal of the comic book character the Incredible Hulk, that “[t]aking away net neutrality is the authoritarian dream.”

“When I saw this tweet, I was tempted to just say, ‘Hulk wrong,’” Pai said. On a similar note, the FCC chief noted an email that asked him, “Do you really want to be the man who is responsible for making America another North Korea?”

It’s not just Hollywood, he noted, pointing to tech giants, such as Twitter, in favor of keeping the Obama-era policy—even as the microblog site censored Rep. Marsha Blackburn, R-Tenn., over a pro-life message.

“When it comes to a free and open internet, Twitter is part of the problem. The company has a viewpoint and uses that viewpoint to discriminate,” he said, later adding, “To say the least, the company appears to have a double standard when it comes to suspending or de-verifying conservative users’ accounts, as opposed to those of liberal users.”

Pai stressed in his remarks to the R Street Institute that the policy proposal to be voted on in December would simply restore the pre-2015 policy, and the Federal Trade Commission would still have regulatory authority to protect consumers.

During a Fox News interview, Pai discussed the threats involving his family, saying, “I understand that people are passionate about policy, but the one thing in America that should remain sacred is that families, wives and kids, should remain out of it.”

The Washington Free Beacon reported in May on a number of vulgar and racist comments made in the public comments section of the FCC website over the internet rule, sparked after TV comedian John Oliver called for flooding the FCC with objections.

Comments made on May 9 include one that says, “Continue to regulate [internet service providers] under Title Two. Failure to do so will cause me to pray for the slow and painful death of Chairman Ajit Pai and every living member of his family, direct or indirect … .”

Another person wrote: “Save internet and f–k this Ajit guy. He’s from India, deport that a–hole. We will take care of him when he’s back.”

Another comment used multiple profanities, and said, “f–k you Ajit Pai for what you’re trying to do, and I hope you die a horrible painful death with no remembrance to your name you c—s–ka.”

Some also suspect that Rep. Frank Pallone, D-N.J., was taking a swipe at Pai’s Indian-American heritage in May when he said in a public speech about Pai:

If you’re truly American, and care about the country and its democracy and the Bill of Rights and capitalism and competition, you should be on the side of net neutrality.