Don’t Believe the Democrat Attacks on Tax Reform. Here Are the Facts. 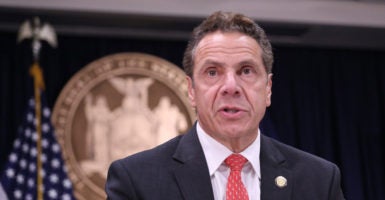 Repealing the state and local deduction, which New York Gov. Andrew Cuomo vocally opposes, would allow $1.3 trillion to be used to reduce tax rates for all individuals and business. (Photo: Jefferson Siegel/TNS/Newscom)

Derek Kreifels is the president of the State Financial Officers Foundation, an organization of state treasurers, state controllers, and state auditors dedicated to free market principles and limited government.

As president of the State Financial Officers Foundation, I have the privilege of working with some of the nation’s sharpest financial officers.

They are not merely treasurers. They are thought leaders, experts, and fighters who, day-in and day-out, serve on the front lines of fiscal policy and intimately understand their state budgets, cash flow, and state pensions.

These leaders—state treasurers, state controllers, and state auditors—know firsthand how policies coming from inside the beltway impact the states.

The rhetoric during this year’s tax reform debate is producing more heat than light. While Democrats portray the tax reform bill as an all-out assault on the American middle class, members of the State Financial Officers Foundation have a different view. We believe tax reform is vital to growing our economy and empowering innovators in our states.

Regarding the middle class, Democrats fail to mention that under the new House plan, the standardized deduction would almost double from $6,350 to over $12,000 for single filers, and $12,700 to $24,000 for married couples filing jointly. That means the number of Americans who claim the standard deduction would likely go from 60 percent of all filers to 90 percent.

Additionally, critics don’t admit that the impact of simplifying the tax code would disproportionately help lower- and middle-income taxpayers, most of whom would be able to file their taxes using a simple postcard.

Democrats are also arguing that higher education will be in shambles because students will no longer be able to deduct student loan interest. The current tax code allows a deduction up to $2,500 if your income is $65,000 or less.

However, this deduction goes away if your adjusted gross income is $80,000 or more. An analysis done by the American Enterprise Institute estimates the average benefit actually received by students is just $202.

The claim that losing the student loan interest deduction would prevent students from applying for new student loans and attending a college or university isn’t supported by facts. And frankly, if that were true, everyone should be pushing to eliminate the deduction, given that the student loan debt crisis in America has ballooned to an astonishing $1.3 trillion.

Democrats continue to argue that states with high taxes will be “destroyed” if state and local tax deductions are eliminated. New York Gov. Andrew Cuomo warned in a tweet earlier this month that “New York will be destroyed, if the deductibility of state and local taxes is included in any final plan that passes the House.”

New York will be destroyed if the deductibility of state and local taxes is included in any final plan that passes the House.

And lastly, Democrats argue that eliminating the mortgage interest deduction on mortgages worth up to $1 million is somehow a tax increase on the middle class.

Aside: It is humorous to most of us that live between the coasts that somehow someone with a $1 million mortgage is still considered to be middle class.

Given the analysis by the National Low Income Housing Coalition that fewer than 4 percent of mortgages in the United States are over $500,000, the “middle class” statistically has nothing to worry about when it comes to the proposed changes.

State leaders from the State Financial Officers Foundation act as the chief financial officers and chief financial literacy officers for their states. Tax reform is one of the most common issues that constituents bring up to these elected officials.

The complicated tax code has made millions of Americans hate April 15 and has required many to hire accountants and lawyers to help them maneuver through the system.