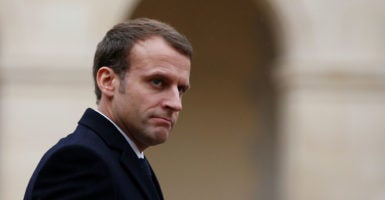 French President Emmanuel Macron announced a number of measures to combat violence against women Saturday, including a fine on “gender-based insults.”

Macron marked the International Day for the Elimination of Violence Against Women by promising “to fight for the non-negotiable equality of both sexes” during his first term in office.

“Let’s seal a pact of equality between men and women,” Macron said. “It is essential that shame changes camp. Gender-based insults will be punishable by law. Offenders will face a deterrent fine.”

The country is already considering making cat-calling and insisting a woman give you her phone number illegal offenses. Aside from the fines on gender-based insults, Macron wants “on demand” bus stops where women can stop a bus anywhere to make their way home safely. The president also wants to make the age of consent 15 to make it easier to punish people who have sex with minors.

There is currently no age of consent in France. A 30-year-old man was acquitted of rape earlier this month after a jury found no evidence that he forced an 11-year-old girl into sexual intercourse.

“France must no longer be one of those countries where women are afraid,” Macron said.

Jacob Bojesson is a foreign correspondent for the Daily Caller News Foundation.