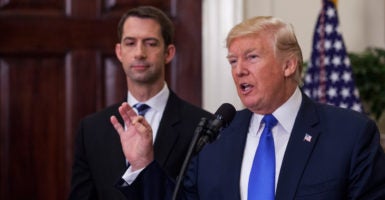 Cotton said Senate Democrats are abusing procedures that allow them to stymie Trump’s executive branch nominees. He said that allows career bureaucrats to run their agencies anyway they want, “without any political accountability.”

The freshman Arkansas senator leveled the charge in remarks to the Federalist Society, a conservative legal group, on Nov. 16 in Washington.

Cotton said it’s time for those abuses to end, and he offered three proposals to set the nomination process back on track.

The first proposal is to end the use of so-called “blue slips” to block judicial nominees. Under Senate tradition, hearings aren’t held for a judicial nominee unless and until his or her home-state senators submit blue slips showing their consent to advancing the nomination.

Cotton cited how Sen. Al Franken, D-Minn., has delayed hearings for David Stras, Trump’s pick to serve on the 8th U.S. Circuit Court of Appeals, by refusing to return his blue slip. Stras is currently a justice on the Minnesota Supreme Court.

The Arkansan praised Sen. Chuck Grassley, R-Iowa, chairman of the Senate Judiciary Committee, for deciding last week to go forward with the nomination process for Stras anyway on Nov. 29.

“The Democrats are claiming that the blue slip should operate as a unilateral veto,” Cotton said. “That is a gross abuse of the blue slip custom, and remember, it’s nothing more than that, a custom, a courtesy. It is not a rule.”

Cotton also called for diminishing the role of the American Bar Association in the judicial nomination review process.

He said Democrats want to wait until the ABA evaluates nominees, but the ABA is a “left-wing” organization that has already declared four of Trump’s nominees to be “unqualified” in the first year alone, while never having characterized a nominee of President Barack Obama as unqualified in eight years.

Cotton described the ABA as a “democratically unaccountable, special-interest organization.”

He also urged an end to Democrats being able to use cloture votes to stall nominations. Cotton explained the process by saying that the majority party files a “cloture petition to end debate on a nomination,” which is then followed by an intervening day before the vote is held for cloture.

After the cloture vote, he said, there are up to 30 legislative hours of debate before the Senate goes through with the confirmation vote, and Democrats are often using those entire 30 hours to stall Trump nominees.

He said Democrats should agree to “30 hours of debate for Cabinet, and Supreme Court, and circuit court nominees; eight hours for all sub-Cabinet positions; and two hours for district court nominations.”

“Either they accept those exact same terms [that Republicans agreed to when they were in the minority], or the Republicans, by a simple majority vote, will change the rules of the Senate,” Cotton said. “We will eliminate cloture votes for all nominations, and we’ll set debate for every nomination for all offices to two hours.”