8 Senators Announce Support for Colonel Under Fire for Marriage Views 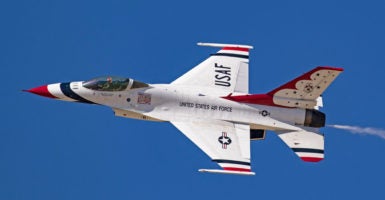 Air Force Col. Leland Bohannon was suspended from duty for refusing to sign a “certificate of appreciation” for a same-sex spouse. (Photo: iStock Photos)

Air Force Col. Leland Bohannon needed reinforcements—and thanks to eight senators, he got them.

The Christian combat pilot has been grounded since spring, when his superiors decided that the colonel’s decision not to sign a “certificate of appreciation” for a same-sex spouse was enough to suspend him from duty.

For Bohannon, a 20-year veteran with a distinguished record, it was a stunning blow. After all, Bohannon, who’d sought the counsel of a command chaplain and staff judge advocate, had asked for a religious accommodation. He got a poor performance appraisal instead. On track to lose his standing and any hopes of promotion, Bohannon reached out to First Liberty Institute for help. Knowing “his career is likely over” if nothing’s done, conservatives everywhere have teamed up to raise the colonel’s case.

>>> COMMENTARY: What Happened to Colonel Who Didn’t Want to Praise an Airman’s Same-Sex Marriage

“Col. Bohannon has suffered severely on account of the [Equal Opportunity] investigator’s mishandling of his religious liberty rights,” the senators wrote. “The Air Force owes it to him to see that justice is restored, along with his good name.” After all, they explain, the colonel did all he could to guarantee that the certificate was signed—just not by him.

“Col. Bohannon recognized the moral and legal dilemma this situation presented, and to his credit, sought to carve out a solution that would affirm the contribution made by the retiring officer’s same-sex partner while at the same time allowing the colonel to abide by his religious convictions,” the senators point out.

The Air Force’s refusal to accept this compromise and its refusal to grant an accommodation—when doing so would cause no discernable harm—raises the question as to which circumstances, if any, would move the U.S. Air Force to defend the free exercise rights of its soldiers.

Like us, they’re asking the Air Force to overturn this decision and reinstate Bohannon in the good standing his record deserves.

You can too—by joining the more than 24,000 people who’ve signed our petition to Wilson. Together with First Liberty Institute and these senators, we’re calling on the military to make it clear through its own guidance that service members are free to exercise the same liberties they’re fighting for.