Redrawing Districts Is the Job of Elected Leaders, Not Judges 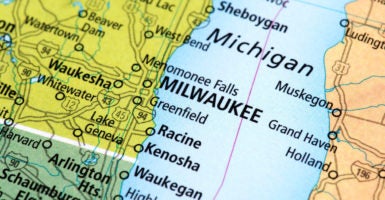 The Supreme Court's forthcoming decision in Gill v. Whitford could have nationwide implications for the practice of redistricting. (Photo: iStock Photos)

There aren’t many issues the Supreme Court has managed to sidestep, but political gerrymandering is one of them. Until now.

We should not transfer authority for drawing political boundaries to unaccountable federal judges who, unlike legislators, can’t be voted out if we don’t like what they did.

In Gill, a lower federal court threw out the state legislature’s redistricting plan from 2011, claiming that it was an unconstitutional gerrymander because the number of seats held by the Democratic Party didn’t match the party’s share of the statewide vote.

Lawmakers in the Republican-controlled legislature had done exactly what Democrats would have done if they were in the majority: They drew districts favoring their own party.

They followed all the redistricting criteria required by Wisconsin, including ensuring that districts are contiguous, as compact as possible, and respecting the boundary lines of political subdivisions as much as possible.

There are two basic types of viable claims against redistricting plans that the Supreme Court recognizes.

First, under the equal protection clause of the 14th Amendment and the “one person, one vote” standard, states must draw congressional districts with as equal a population as possible. States are given more flexibility for state legislative districts to allow them to meet traditional redistricting requirements.

The legal standard on how much race can or must be used is confusing and so amorphous that the federal courts have been flooded with lawsuits challenging redistricting plans.

In 2004 in Vieth v. Jubelirer, four justices held that political gerrymandering claims are not “justiciable,” meaning they are not claims that courts should consider.

Justice Anthony Kennedy agreed the claim in that case should be thrown out, but said he might be open to considering a political gerrymandering claim in a future case if a sound legal standard could be established for determining what type of behavior was unconstitutional.

But since drawing up political districts is inherently political, how can one determine how much or how little politics is acceptable?

The Wisconsin challengers claim they have a judicially manageable standard—a test they call the “efficiency gap.” The test defines every vote for a losing candidate as “wasted,” as well as every vote not needed to secure a victory. So all of the votes above 51 percent for the winning candidate are “wasted.”

This amounts to proportional representation, a right that neither the U.S. nor the Wisconsin Constitution recognizes. As the Wisconsin state Senate points out in a brief, this treats “partisan preference as a determinative and immutable characteristic that has little to do with the attractiveness of candidates.”

It also ignores political geography. Democratic voters are concentrated in urban areas such as Madison and Milwaukee, while Republican voters are spread out much more widely statewide.

Drawing districts that ignore these residential patterns to meet the “efficiency gap” test would result in even more bizarrely drawn districts. It would also make it much more difficult to draw districts that are compact, contiguous, and don’t break up towns and even neighborhoods.

As noted by Wisconsin’s solicitor general, Misha Tseytlin, 10 of the 17 redistricting plans cited by the challengers’ own expert as the “worst” partisan gerrymanders under the “efficiency gap” test were neutral plans drawn by supposedly objective courts and commissions.

In May in Cooper v. Harris, a North Carolina redistricting case, dissenting Justice Samuel Alito warned the court against transforming the federal courts “into weapons of political warfare” that “invite the losers in the redistricting process to seek to obtain in court what they could not achieve in the political arena.”

If the court decides a “proof of intent to act for political purposes” in redistricting is unconstitutional, they will be turning the courts into just such weapons and usurping the authority of the political branches of government.

This article originally appeared in the Milwaukee Journal Sentinel.