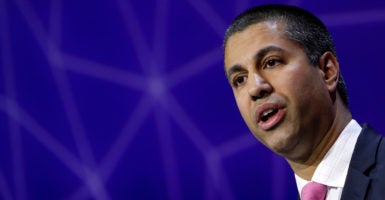 The Federal Communications Commission will vote in December on a proposal to repeal Obama-era net neutrality rules. Shortly after publicly announcing the news, FCC Chairman Ajit Pai spoke to Daily Signal Editor-in-Chief Rob Bluey. In the edited transcript that follows, Pai explains what it means for consumers and addresses concerns voiced by the left.

Bluey: The Federal Communications Commission plays a big role in all of our lives because you regulate radio, TV, cable, wire, and satellite communications. And you have some major news to share with us that involves your Restoring Internet Freedom Order. Could you tell us what this order is?

Pai: It is essentially my proposal to repeal the Obama administration’s heavy-handed regulations adopted two years ago on a party-line vote that regulated the internet. What I’m proposing to do is to get rid of those regulations and to return to the bipartisan light-touch framework that governed the internet starting in the Clinton administration and continuing all the way to 2015.

Bluey: You have been working on this for quite some time. Earlier this year, you outlined the principles that you wanted to see as chairman of the FCC. What’s the motivating factor to do this right now?

Pai: We had a chance to take a stock of the record, all the facts that were in the record. And we want to make the right judgment because the internet is so important in all of our lives. We obviously want to have a free and open internet. We want to have investment in infrastructure. And we want to be consistent with the law. And I think you’ll see when we release this order publicly Wednesday that this order does all three of those things.

Bluey: Some people might be wondering, how does this affect me personally? What does this mean for me and my use of the internet?

We obviously want to have a free and open internet. We want to have investment in infrastructure. And we want to be consistent with the law.

Bluey: This is an issue that has sparked tremendous interest among both the left and the right. Tech giants and other supporters of the existing rule say that they’re necessary to ensuring that the internet stay on a level playing field. How do you respond?

Pai: I would say that innovation drives the most when you have light-touch frameworks, such as the one that we had for 20 years. For example, Facebook and Amazon and Netflix and Google, those are now globally known names and brands. But they didn’t exist 20 years ago. And they developed precisely because we had a free-market approach.

We let all kinds of business models thrive and then took the action as necessary against any competitive behavior. But we didn’t pre-emptively regulate everything like a slow-moving utility. Had we done that, I daresay that a lot of these companies wouldn’t have gotten off the ground, or certainly wouldn’t have grown so quickly.

Bluey: With the regulations put in place in the Obama era a couple years ago, what has that meant? Have you seen a pullback in terms of investment and in some of the advancements in technology?

Pai: We have. We take a very careful look at the facts and do economic analysis. And we find that investment in networks decreased below what it would have been had these rules not been imposed.

Additionally, the FCC started all kinds of investigations into things like free data offerings where wireless plans that want to exempt certain streaming services from your data limits. And so that ended up reducing consumer value because a lot of companies thought, “Well we’re afraid to innovate because the FCC might take action against us.”

[T]hese heavy-handed rules, based on the 1934 rules that were developed for Ma Bell, have had a negative impact on consumers.

Both with respect to investment and innovation, we find that these heavy-handed rules, based on the 1934 rules that were developed for Ma Bell, have had a negative impact on consumers.

Bluey: How would your plan address communications giants who wish to corner the market?

Pai: It will not happen for a couple different reasons. First, the FCC, as under my proposal, would require these companies to be completely transparent about their business practices. They have to reveal, for example, whether they’re engaging in broad blocking and the like. Additionally, the Federal Trade Commission would be empowered to take action just as they did prior to 2015.

Secondly, if you’re talking about cornering the market on service, that is not a question about Title II regulations of the FCC. That’s a question about competition, and that’s exactly why over the last 10 months we’ve been focused on getting much more competition into the marketplace as possible, using whatever technology, satellite or wireless or fixed wires or the like.

Heavy regulation always benefits the entrenched incumbents much more than the upstarts.

I want all of these technologies to compete, but you won’t have a fair chance of getting those smaller competitive entrants in if you heavily regulate this marketplace to begin with. Heavy regulation always benefits the entrenched incumbents much more than the upstarts.

Bluey: How do those free-market principles play into your role as chairman of the FCC?

Pai: It infuses everything I do and I would like to think the agency does because, to me at least, if a marketplace is competitive, then the case for pre-emptive regulation is a lot weaker. The FCC should be imposing rules on an entire industry only when there’s a concrete case of market failure—the marketplace is so broken that there’s no hope but for the FCC to step in and heavily regulate it.

Well, if anything, it wasn’t broken in 2015. Three unelected bureaucrats decided to save the internet from these hypothetical harms. And so, to me at least, the free market has produced much more value than pre-emptive regulation ever has.

Bluey: You’ve had people like Sen. Ted Cruz call net neutrality regulations “Obamacare for the internet.” How would you describe the regulations for people who are trying to comprehend the complexity of this?

Pai: Do you think of the internet as being as fast moving and as innovative as your water company? As your electric company? As your subway system? I mean, if so, that’s exactly what these Title II common carrier regulations were designed to address: the slow-moving Ma Bell, AT&T telephone monopoly of the 1930s. But that’s not the internet that we have.

Bluey: This plan includes a transparency requirement. Will this encourage more competition in the market?

Pai: Absolutely, and that’s one of the reasons why it was important to us to include that component. Because if the internet service provider that you’re subscribing to is disclosing their business practices and you don’t like those practices, you have a chance to switch to somebody else.

[T]he free market has produced much more value than pre-emptive regulation ever has.

For example, if you have a wireless carrier that says, we’re going to throttle certain kinds of content, you can switch to another provider that better meets your needs. And so that’s part of the reason why transparency backed up by Federal Trade Commission enforcement is really important.

Bluey: Some argue that the reversal of net neutrality rules will only benefit business and not consumers. How do you respond?

I’ve been to parts of America, especially rural America and low-income urban America, where folks are on the wrong side of the digital divide. My argument is that imposing these regulations and squelching a lot of the competition and investment from these providers ultimately leaves consumers either with slower internet service or no access at all.

Bluey: A couple of years ago, there were complaints about the openness of the FCC. Some of these decisions were made behind closed doors and the public didn’t even see what you were voting on until after the vote took place. Where does the proposal go from here?

Pai: It’s going to be a big change from 2015. In 2015, as you pointed out, the FCC voted on these regulations, and only two weeks after the vote, formally released them so the American people could see. This time, we’re putting the cart after the horse, where it belongs.

We are publicly releasing this information Wednesday so that all of the American people, not just the commissioners, can see it. And then on Dec. 14, we’ll be voting at the FCC, on whether to adopt my proposal to repeal these regulations.

Bluey: You recently gave a speech at the Reagan Library in which you talked about the changes that took place during the Reagan era. How much have those been an influence in your leadership of the FCC?

[W]e are going to see a digital revolution unleashed for consumers in 2017.

Pai: To me at least, the Reagan administration was at the vanguard of defending free markets and innovation. And if you look at some of the debates in the 1980s, they weren’t all that dissimilar from some of the things we’re talking about today. Especially having had the chance to talk to both of President [Ronald] Reagan’s FCC chairmen, I can tell you they struggled with these issues, too.

We need to be able to convey the power of free markets. They are ultimately much better for consumers because it gets government out of the way of innovation, allows business models to thrive, and ultimately, unleashes value for consumers. And I think just as in the 1980s, we are going to see a digital revolution unleashed for consumers in 2017.

The free markets have ultimately delivered much greater consumer welfare than pre-emptive regulation ever has.

This article was updated to fix a transcription error.