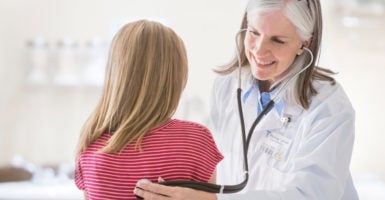 Four-year-old Collette Briggs, not pictured here, suffers from an aggressive case of leukemia, and the Briggs family for two years has depended upon the medical professionals at a hospital that specializes in pediatric cancer care. (Photo: Mike Kemp Blend Images/Newscom)

The Washington Post recently published a heart-wrenching story of two Virginia families caught up with the consequences of a damaged, declining, and increasingly noncompetitive health insurance market.

Little Collette Briggs, 4, suffers from an aggressive case of leukemia, and the Briggs family for two years has depended upon the medical professionals at a hospital that specializes in pediatric cancer care.

The family’s insurer has withdrawn from the market, and the remaining insurer has no contract with that hospital. Narrow networks of doctors and hospitals have been a common feature of health insurance offerings in the declining and increasingly noncompetitive Obamacare insurance exchanges.

The Briggs family misfortune is hardly an isolated phenomenon. As the Post reported, “It is not uncommon for insurers to cut larger research-based hospitals from its plans on the exchanges as a way to cut costs. By narrowing their networks, carriers avoid paying the higher rates that academic medical centers charge.”

By virtue of its flawed design and inflexible regulations, the evolution of narrow health insurance networks—restricted insurance contracts with doctors and hospitals—was, among other big bugs, baked into Obamacare from its inception.

The historical record is clear. Examining the initial data in 2014, the first full year of Obamacare’s implementation, the Congressional Budget Office reported that the plans in the health insurance exchanges nationwide had “narrower networks” than CBO analysts had anticipated, and the plans in the exchanges were also imposing “tighter management” on the use of medical services, compared with employer-sponsored health insurance.

Likewise, researchers with the Robert Wood Johnson Foundation reported that among the “silver plans”—the benchmark plans, or the most popular plans on the Obamacare exchanges—41 percent of them had small or “extra small” networks of medical professionals.

Restricting the availability of medical providers or services is just one way for insurers to stay in these so-called Obamacare “markets.” These “markets” are the way they are, however—beset by soaring costs and declining competition—because of Washington’s deliberate political decisions.

This complex set of federal regulations drove up the costs of health insurance coverage for millions of Americans in the individual and small group markets.

In 2015, premium increases slowed, but in 2016, they climbed again. For 2017, the Department of Health and Human Services projected an average national premium increase of 25 percent in the exchanges.

The result: Younger and healthier persons are staying away from coverage in the exchanges in droves. With an older and sicker insurance pool, costs soar.

For next year, by the way, Health and Human Services is projecting that the average increase for the “silver plans” will be 37 percent.

On choice and competition, the historical record is also indisputable. In 2014, Kaiser Family Foundation analysts declared, “The long-term success of the exchanges and other [Affordable Care Act] provisions governing market rules will be measured in part by how well they facilitate market competition, providing consumers with a diversity of choices and, hopefully, lower prices for insurance than would have otherwise been the case.”

The Kaiser Family Foundation analysts were dead right on that one.

Today, being able to pick among a broad choice of health plans and providers is, for millions of Americans, rapidly becoming a rarity—and not just for the beleaguered Briggs family in Virginia. Between 2013 and 2014, the number of insurers offering coverage in the nation’s individual markets declined by 29 percent.

By 2017, consumers in 70 percent of U.S. counties had only one or two insurers offering coverage in the exchanges. By 2018, it is likely to be worse.

The verdict is in. President Barack Obama and his allies in Congress created this mess—from the very beginning. The soaring costs, crazy deductibles, declining choice and competition, along with the increasingly narrow networks, are a direct result of bad policy.

That’s why the Senate needs to get back to work and quickly undo Obamacare’s damage, allow the growth of functional insurance markets, and provide millions of Americans with more choice, a broader range of health care options, and lower costs.