Here’s How Bad the TSA Is Failing at Airport Security. It’s Time for Privatization. 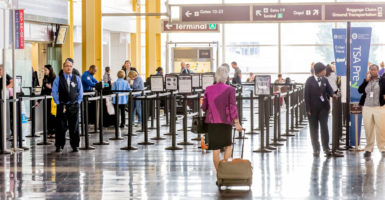 The Transportation Security Administration is tasked with providing security to the traveling public. (Photo: iStock Photos)

Ceara Casterline is a member of the Young Leaders Program at The Heritage Foundation.

This year, the Department of Homeland Security carried out covert tests on Transportation Security Administration security, and the results weren’t pretty.

The results of the tests showed that the TSA screeners failed to detect weapons, drugs, and explosives almost 80 percent of the time. While the exact failure rate is classified, multiple sources indicate it is greater than 70 percent.

The Department of Homeland Security inspector general carries out “Red Team” tests periodically to check the competence of the TSA’s ability to detect and stop fake weapons from getting through airport security.

In 2015, the TSA failed these tests by an even larger margin—95 percent.

Sadly, these results are not surprising. The TSA has a history of failing to uphold basic security standards.

So why is the TSA failing 80 percent of the time, and why is Congress not demanding serious changes be made? Congress cannot stand idly by and watch as the TSA continually fails to uphold basic standards and loses the faith of the American people.

In any other business, 95 percent and 80 percent failure rates over the course of several years would not be acceptable. Any vendor who failed to deliver on his promises, or any employee that failed to show up to work that often, would be fired.

And so it is time to fire the TSA from front-line screening. The best solution to our broken airport security system is to privatize TSA screeners.

The U.S. could mirror the Canadian public-private partnership, or switch to the Screening Partnership Program already in place, which currently allows airports to opt out of TSA screenings and use private screeners instead.

Either of these options would replace government employees with private screeners who would be responsible for monitoring the screening process.

The TSA would still be responsible for setting and overseeing aviation for security rules—in fact, rather than running a large screening workforce, it could focus exclusively on setting standards and figuring out how to improve security.

Reports have found Canada spends 40 percent less per capita on aviation security, which frees up money that could be used in other areas to secure the homeland. That could be true for the U.S. as well.

The TSA has struggled to manage its workforce, but allowing private security companies to manage their workforces would strengthen screeners’ capabilities and allow the TSA to improve its oversight role.

Additionally, if the private workers did not meet safety standards, they could promptly be fired and replaced, unlike in the current system.

We cannot afford to wait for the next terror attack to become serious about reforming our airport security system. Congress needs to privatize the TSA to protect travelers from the very real threats our nation faces.