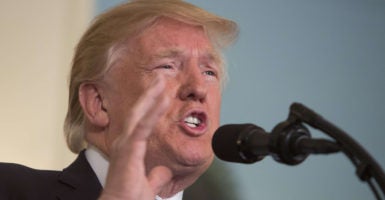 President Donald Trump is making welfare reform a major priority and will sign an executive order laying out the administration’s goals while also urging action by Congress, a White House official said Thursday.

Trump’s executive order will be twofold, said Paul Winfree, director of budget policy at the White House. The order will state the Trump administration’s principles for welfare reform of empowering individuals and learning from state and local initiatives, and then direct federal agencies to come back to the president with recommendations for implementing the principles.

The White House is also working with Congress on reform proposals, Winfree said, but in the short term is looking at what federal agencies can do unilaterally. The federal government has 89 different welfare programs spread across 14 departments and agencies.

One of the messages is that I’ve been driving to essentially our staff and our agencies on welfare reform and the direction we are taking is this message that it’s people that help people. It’s not governments that help people.

So, how do we learn from people who are actually in the communities actually helping people and then ultimately empower them by either getting out of the way or redirecting the resources in their direction to essentially reward successes without a unilateral approach or without just kicking it to the states and transition [to] what is essentially a federal role into a state role.

The second half of the executive order, which is yet to be signed, essentially directs agencies to take a look at the principles and then figure out what they can do on their own to start meeting some of the objectives that are out there through changes in regulation and guidance and then to ultimately submit those recommendations to the president for an evaluation.

The last sweeping welfare reform package came more than two decades ago, passed by a Republican Congress and signed into law by Democratic President Bill Clinton. However, Robert Rector, who helped shape some of the 1996 bill, said new improvements are needed.

“The current welfare system harms the very poor that it’s trying to help,” Rector, a senior research fellow for domestic policy studies at The Heritage Foundation, said. “We need a reformed welfare system that promotes work and marriage, and rewards outcomes rather than simply greater spending.”

The Heritage Foundation is supportive of the principles in several proposals in Congress now.

Other members of Congress have talked about saving $15 billion annually by eliminating fraud, waste, and excessive benefits in the earned income tax credit, while making the program more encouraging of work. Others call for removing the marriage penalty with regards to welfare programs.