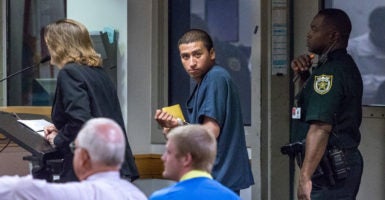 The Trump administration is pointing to a large federal roundup of members of the violent gang MS-13 as vindication of increased enforcement efforts and reason to change the policy on unaccompanied minor illegal immigrants.

The Justice Department and Department of Homeland Security announced a joint effort that led to the arrest of 214 gang members and those involved with gang-related crime.

MS-13 is an international criminal gang that spread throughout Central America into the United States—in largely urban centers such as Los Angeles, Boston, New York City, and into Toronto, Canada. The organization’s motto is “mata, viola, controla,” which means, “kill, rape, control.”

During a press conference Thursday announcing the arrests, Tom Homan, deputy director of Immigration and Customs Enforcement, noted the 2008 law on unaccompanied minors does not allow them to be immediately returned to their country of origin.

“The agencies sent up a series of policy requests to the Hill to address a lot of issues to further control the border and illegal immigration,” Homan said. “Some of these policies are being exploited and used by criminal organizations. That’s why that’s one of the policy issues we asked Congress to look at and help us with.”

The current law states that unaccompanied minors from countries other than Canada or Mexico aren’t subject to expedited removal, but the minors are promptly released into the United States upon arrival at the border. The Department of Homeland Security transfers custody to the Department of Health and Human Services Office of Refugee Resettlement within 72 hours. That office must promptly release the minor to relatives or other sponsors, according to the White House. In some cases, the sponsors were criminals who abused law.

Of the total immigration hearings for unaccompanied minors that came to the United States between 2014 and 2016, 12,977 cases out of 31,091 completed ended in removal, according to a Congressional Research Service report in January. Out of those removals, 11,528, or 89 percent, did not show up for their hearing to make their case against removal proceedings, and often remained in the country.

Also, more than half of the unaccompanied minors that came into the United States in 2014 and 2015 were 16 or 17 years old, according to the Government Accountability Office in a February 2016 report.

Out of the 214 arrested, 93 were charged with crimes including murder, aggravated robbery, racketeering, narcotics trafficking, narcotics possession, firearms offenses, domestic violence, assault, forgery, drunken driving, and illegal entry/re-entry. The remaining 121 were arrested on administrative immigration violations, according to the Justice Department.

“With more than 10,000 members across 40 states, MS-13 is one of the most dangerous criminal organizations in the United States today,” Attorney General Jeff Sessions said in a statement. “President Trump has ordered the Department of Justice to reduce crime and take down transnational criminal organizations, and we will be relentless in our pursuit of these objectives. That’s why I have ordered our drug trafficking task forces to use every law available to arrest, prosecute, convict, and defund MS-13. And we are getting results.”