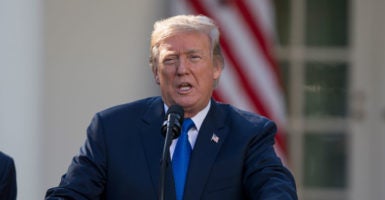 On Friday, President Donald Trump announced the addition of five individuals to his outstanding list of potential candidates for a future Supreme Court vacancy.

As was the case with the lists Trump put out during his presidential campaign, these new additions to the list are conservative men and women who are committed to interpreting the Constitution according to its original public meaning.

While there are currently no vacancies on the Supreme Court, rumors abound that Justice Anthony Kennedy may retire in the near future. Here’s a look at the new names.

Barrett, a former University of Notre Dame law professor, was recently confirmed to the 7th Circuit. After graduating from Rhodes College and Notre Dame Law School, Barrett clerked for Judge Laurence Silberman on the D.C. Circuit and Justice Antonin Scalia on the Supreme Court.

Barrett is a prolific writer, having published in leading law reviews across the country on topics including originalism, federal court jurisdiction, and the supervisory power of the Supreme Court.

At her confirmation hearing in September, Senate Democrats chided her for her writings as a law student in 1998 and asked inappropriate questions about her Catholic faith. But Barrett received robust bipartisan support from the legal community, including from Neal Katyal, a prominent liberal who served as President Barack Obama’s acting solicitor general.

Appointed to Georgia’s highest court by Gov. Nathan Deal in 2016, Grant previously served as the state’s solicitor general and in other capacities in the state attorney general’s office. She also worked in the George W. Bush administration, serving on the Domestic Policy Council and the Office of Cabinet Affairs.

Grant began working at the White House weeks before the terrorist attacks on Sept. 11, 2001, and after that horrific day, her mission became making government “as effective as it can be and as protective of liberty as it can be.”

Earlier in her career, she served as an aide to then-Rep. Nathan Deal, R-Ga., on Capitol Hill, clerked for Judge Brett Kavanaugh on the D.C. Circuit, and worked in private practice at Kirkland & Ellis, one of the top appellate law firms in Washington, D.C.

She is a graduate of Stanford Law School and Wake Forest University.

In a letter recommending her appointment to the state’s high court, Kavanaugh praised Grant’s “superb” writing, which is “[o]ne of the most important duties” of judges. In her 11 months on the bench, she’s heard numerous cases and displayed her excellent writing abilities.

In a recent decision reinstating criminal charges against a woman who secretly filmed her boss in the nude, Grant wrote a special concurrence agreeing with the judgment but not the reasoning of the majority. The majority analogized a state law criminalizing “hostile intrusion or surveillance” by a private party with the Fourth Amendment to the U.S. Constitution. She explained, “[t]he statute cannot bear the weight that the Fourth Amendment puts on it when addressing the behavior of private parties and not of the government” and that it “addresses a privacy interest quite different than the one that we all share against government search and seizure.”

A former clerk for Justice Anthony Kennedy and graduate of Yale College and Yale Law School, Kavanaugh worked as a senior associate counsel and assistant to President George W. Bush and as an associate independent counsel.

Former Attorney General William Barr stated that Kavanaugh “quickly established himself as one of the key outside lawyers I went to on some of my toughest legal issues. He has a keen intellect, exceptional analytical skills, and sound judgment. His writing is fluid and precise. I found that he was able to see all sides of an issue and appreciate the strengths and weakness of competing approaches. He was particularly effective in dealing with novel issues which required some original thinking.”

Since joining the bench, Kavanaugh has distinguished himself as a thoughtful, apolitical jurist, who is not afraid to stake out bold positions on complex issues. We included him on The Heritage Foundation’s list of potential Supreme Court nominees.

Kavanaugh recently delivered the annual Joseph Story Distinguished Lecture at Heritage—joining the ranks of Justice Clarence Thomas and many other renowned federal judges. He spoke eloquently about the judiciary’s essential role in maintaining the separation of powers.

Kevin Newsom, former all-star appellate lawyer, was confirmed to the 11th Circuit in August. After graduating from Samford University and Harvard Law School, Newsom clerked for Judge Diarmuid O’Scannlain on the 9th Circuit and Justice David Souter on the Supreme Court. He then worked in private practice before serving as Alabama’s solicitor general.

After five years of government service, Newsom went back to private practice where he became a partner at Birmingham’s Bradley Arant.

Before joining the bench, Newsom had an extensive Supreme Court practice, arguing four cases at the high court and authoring dozens of cert. petitions and amicus briefs. Newsom has won countless awards for his work, including the National Association of Attorneys General’s Best Brief Award four times.

He has argued more than 30 cases in federal appellate courts across the country as well as in Alabama’s appellate courts. In 2011, Roberts, the chief justice, appointed Newsom to the Advisory Committee on Appellate Rules.

Patrick Wyrick is the youngest person on the Trump list, at 36 years old. Then again, Joseph Story was only 32 when he was nominated by President James Madison to serve as an associate justice to the Supreme Court, a position in which he served with great distinction for nearly 34 years.

Wyrick was appointed to the Oklahoma Supreme Court last February, after serving as the state’s solicitor general for six years.

A graduate of the University of Oklahoma and that school’s College of Law, Wyrick clerked for U.S. District Court Judge James Payne.

When Wyrick was nominated to the Oklahoma Supreme Court, then-State Attorney General Scott Pruitt described Wyrick as “a superb lawyer” and “a constitutional scholar well-versed in both state and federal law … ” He added that Wyrick’s “wisdom, compassion, and integrity are unparalleled among the many public servants with whom I’ve had the pleasure of working.”

In his short time on the bench, Wyrick has written some noteworthy opinions, including the majority opinion in a case striking down a fee that the Oklahoma Legislature imposed on cigarette companies for violating a provision in the Oklahoma Constitution that sets forth the procedures that must be followed before enacting a “revenue raising” measure.

Although young, Wyrick’s meteoric legal career could ultimately land him on the high court.

We commend the president for taking the utmost care in continuing to identify outstanding individuals to serve on all levels of the federal bench.