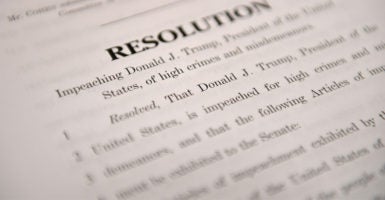 Spurred by recent state election wins, a liberal billionaire, and a leading legal scholar on the left, six House Democrats have signed onto a resolution to impeach President Donald Trump.

“Calls for impeachment started before the guy even took office,” @georgepieler says.

The party’s leadership has not embraced the movement, and the resolution faces numerous hurdles to go beyond political theater.

Still, the five proposed articles of impeachment advance earlier, isolated efforts to put Trump on trial in the Senate. Rep. Brad Sherman, D-Calif., who hasn’t signed on to the new resolution, introduced a bill, and some of the House’s other most liberal Democrats have made scattered speeches invoking impeachment.

The lead sponsor is Rep. Steve Cohen, D-Tenn., who also was joined by Reps. Luis Gutiérrez of Illinois, Al Green of Texas, and Adriano Espaillat of New York.

“Mr. Trump is failing and has turned back the clock on the more than 50 years of progress our country has made in civil rights and equality,” Espaillat said in a prepared statement.

The five articles of impeachment accuse Trump of obstructing justice, violating the emoluments clause of the Constitution, and undermining the judiciary and the press.

Meanwhile, the liberal watchdog group Citizens for Responsibility and Ethics in Washington has joined the attorneys general of Maryland and the District of Columbia in filing suit over emoluments—that is, Trump’s foreign business ties amounting to potential conflicts of interests.

It is improbable that legal charges would stick at this point, but impeachment can be broadly defined and is ultimately a political process, said George Pieler, a former deputy legal counsel for Senate Majority Leader Bob Dole and a former acting assistant secretary of education.

“The concept of high crimes and misdemeanors doesn’t have a historically defined legal meaning,” Pieler told The Daily Signal in an interview. “Is there a credible ground? The answer is no, but that’s mainly because calls for impeachment started before the guy even took office. But, impeachment isn’t based on ‘this law must be violated’ or even ‘a law must be violated.’”

The new book “Impeachment: A Citizen’s Guide” by Harvard law professor Cass Sunstein, the Obama administration’s director of the White House Office of Information and Regulatory Affairs, argues that illegality isn’t needed to oust a president.

Referring to the Constitution, a description of the book on Amazon says: “[T]he president can be impeached for abuses of power that do not violate the law. Even neglect of duty counts among the ‘high crimes and misdemeanors’ delineated in the republic’s foundational document.”

Liberal billionaire Tom Steyer launched a $10 million ad campaign urging Congress to impeach Trump, saying in one of the commercials that “people in Congress and his own administration know that this president is a clear and present danger who is mentally unstable and armed with nuclear weapons.”

Steyer’s rationale wasn’t included in the articles of impeachment introduced by the six Democrats.

The push comes just a week after Democrats had decisive statewide victories in New Jersey and Virginia, which many Democrats hope foreshadow the 2018 midterm elections.

Gillespie embraced you and everything you stand for, @realdonaldtrump. The fact is the people of Virginia rejected your divisive message. You’re unfit for office and you know it. https://t.co/KvyrqQS5Tt https://t.co/24Nk7Owh6W

But those articles seem a bit of a stretch, Pieler said. Accusing Trump of disrespecting federal judges and the press is a nonstarter for impeachment, he said.

But he noted that both of the legal matters—obstruction and emoluments—haven’t been settled.

“As far as the emoluments go, there is some litigation going on now. I know the application to emoluments in his situation is a novel approach to emoluments, but courts change their minds all the time,” Pieler said. “The other, obstruction, supposedly that’s on Mr. Mueller’s list, the issue of whether there was obstruction in the Comey firing. So, that’s not a resolved matter.”

Two of the Democrats’ articles of impeachment deal with emoluments, one with foreign businesses and another with domestic businesses, and note that Trump has not released his income tax returns. The fourth and fifth articles deal largely with Trump lobbing insults at judges and journalists.

Article IV accuses Trump of “undermining the independence of the federal judiciary and the rule of law.” The grounds? Trump called a U.S. district judge a “so-called judge” in a tweet, and pardoned Joe Arpaio, the former sheriff of Maricopa County, Arizona, after a federal judge found Arpaio in criminal contempt.

Article V accuses the president of “undermining freedom of the press” by calling media organizations “fake news,” for “circulating a video of himself violently wrestling a man covered by the CNN logo,” and for disparaging remarks about TV news hosts Megyn Kelly and Mika Brzezinski.

“His attacks on ‘so-called’ judges and ‘fake news’ have undermined public confidence in the judiciary and the press,” Cohen said in a public statement that also criticized Trump for firing Comey and alleged conflicts of interests related to his businesses.

“It’s time for Congress to take action to stop this reckless and harmful behavior by removing Mr. Trump from office,” the Tennessee Democrat said.

The impeachment articles are “bizarre and unsubstantiated,” said Kelly Shackelford, a constitutional lawyer who has argued before the Supreme Court and is president and CEO of First Liberty Institute, an organization that defends religious freedom.

“The only reason an impeachment push is going is because they didn’t want him to get elected: ‘We lost the election so now we want impeachment,’” Shackelford told The Daily Signal in an interview, adding:

That’s not how the Founders intended. Otherwise, every time the party that loses could say, ‘Hey, that’s not the guy we want, let’s impeach him and come up with some justifications that are really weak.’

A majority vote in the House is required to approve articles of impeachment. But even if Democrats regained a majority in the 2018 elections, it takes 67 senators to convict and remove a president from office.

The House voted to impeach President Andrew Johnson in 1868 and, more than 100 years later, President Bill Clinton in 1998. In each case, the Senate failed to reach the supermajority threshold for removal.

Still, much of the liberal base could demand impeachment, Shackelford said.

“It’s all political theater and no substance,” he said, adding:

My prediction of what you are going to see in the Democratic Party is the really hard-line base run on this and the rest are going to say, ‘You’re killing us, stop it.’ They [the White House] will probably like it because it will stoke how unreasonable [some Democrats] are, and nobody wants that.