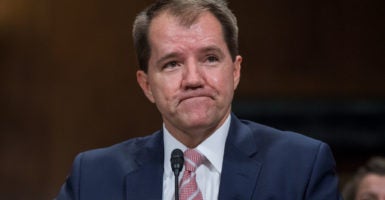 This week, two nominees to the 5th U.S. Circuit Court of Appeals appeared before the Senate Judiciary Committee, facing fierce opposition from Democrats.

President Donald Trump nominated Don Willett and James Ho to seats on the federal appeals court based in Texas.

Willett, currently a justice on the Texas Supreme Court, is known as the “Tweeter Laureate of Texas” for his entertaining social media presence.

Despite this playful side, Willett is a thoughtful jurist with more than a decade of experience on the bench. He also worked for George W. Bush during his governorship and presidency.

Willett was included on Trump’s list of potential Supreme Court nominees—which ups the stakes of his confirmation to the federal appeals court.

Senators spent much of their time asking about a memo Willett wrote when he worked for then-Gov. Bush and his tweets—calling to mind professor Orin Kerr’s satirical account of a confirmation hearing in 2035.

Starting with ranking member Sen. Dianne Feinstein, D-Calif., several Democrats asked about a gubernatorial proclamation on women’s rights in the workplace Willett worked on for Bush.

In the memo, Willett questioned whether the proclamation should mention things like pay equity (“an allegation that some studies debunk,” he wrote), “glass ceilings,” and other language with a clear ideological bent. Feinstein described the memo as “deeply concerning.”

But as Willett explained, he simply advised that the proclamation be changed to conform to internal guidelines suggesting proclamations not “take a side” on specific policies or legislation.

Rather than focus on Willett’s judicial record and ask questions about his judicial philosophy, senators also picked apart his tweets. They even came armed with a blown-up poster of one tweet.

It’s worth pointing out the majority of Willett’s more than 25,000 tweets commemorate important dates in American history, make jokes about the law, and chronicle the lives of his children, the “wee Willetts.”

When ur calendar marks every day as #ConstitutionDay! ??? pic.twitter.com/YGL1m3ZeHZ

Hey, girl—are you the Constitution? ‘Cause I’m sworn to preserve, protect & defend you.

—Me, flirting w/ my wifepic.twitter.com/tb5DYGWXLe

That time my scurvy scallywag Genevieve plundered a free dozen donuts for dressing like a pirate! #TalkLikeAPirateDay pic.twitter.com/ErNbc8X6fN

At the hearing, Willett explained this was “a ham-handed attempt” at a joke that was clearly off the mark. Franken asked Willett to walk him through the joke (the former comedian said he couldn’t follow), and Willett said he never meant to demean anyone.

I could support recognizing a constitutional right to marry bacon. pic.twitter.com/HKPW6tE4H6

He explained he was trying to “inject a bit of levity” and didn’t mean to disparage anyone.

Sen. John Kennedy, R–La., asked Willett if he would agree not to tweet anymore if confirmed to the federal bench.

Willett responded that he has not decided (despite his wife’s suggestion that he shouldn’t tweet) because he thinks there is a value to tweeting about the Constitution and providing basic civic education. He cited statistics about how one-third of Americans can’t name a single branch of government.

Since his nomination in September, he had been radio silent on Twitter until this week, when he tweeted, “To live under the American Constitution is the greatest political privilege that was ever accorded to the human race. –Calvin Coolidge.”

“To live under the American Constitution is the greatest political privilege that was ever accorded to the human race.”
—Calvin Coolidge pic.twitter.com/l9q5FcdqwU

Sen. Sheldon Whitehouse, D-R.I., also brought up the fact that conservative groups in Texas supported Willett’s election to the state’s Supreme Court, asking why these groups would support him without some assurance that he would rule in their favor if elected. Apparently, in Whitehouse’s view, that’s the only reason to support a judicial nominee.

Texas, by the way, has partisan judicial elections, so it’s not unusual that he garnered support in this way.

Willett responded that the “north star” for judges is legal principles, not personal preferences, so any group that supported him would not hold sway over him.

Sen. Ted Cruz, R-Texas, piped up that what Whitehouse said sounded like an indictment of judicial elections, generally, and that in his time on the bench, Willett had earned a reputation as a fair and impartial judge.

Though most of the senators’ questions were aimed at Willett, Ho fielded a few as well.

A partner at the Dallas office of Gibson Dunn, Ho previously served as solicitor general of Texas. In that post, he received two Best Brief Awards from the National Association of Attorneys General.

He also served in the Justice Department’s Office of Legal Counsel during the George W. Bush administration, and clerked for Justice Clarence Thomas.

Sen. Dick Durbin, D-Ill., and Whitehouse pressed Ho on his work in the Office of Legal Counsel and his involvement with the so-called torture memos. Ho explained that he did not work on those memos, although they apparently cited another memo Ho wrote.

Whitehouse complained that Ho did not provide the memo to the committee, but Ho countered that it’s a privileged document, so it’s the government’s decision—not his—whether to release it.

Nine presidents have solicited these ratings before selecting nominees, but some have expressed concern about the American Bar Association’s liberal bias. Trump, like Bush, has not sought the association’s ratings prior to making nominations.

While the American Bar Association claims “ideological or political considerations are not taken into account,” it gave Grasz that rating because he is pro-life and it believed Grasz could not set aside his “passionately-held social agenda” to apply the law fairly.

Cruz pointed out that the American Bar Association’s 15 evaluators have made political donations, mostly to democratic candidates and causes (including pro-abortion groups). Cruz correctly pointed out that those individuals no doubt have a right to be left-wing political activists, but they cannot masquerade as neutral judicial evaluators.

This is shocking, to say the least, given the fact that these judges are widely regarded as leading jurists.