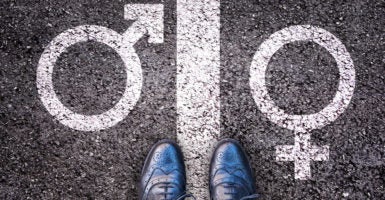 A majority of Americans (54 percent) still believe that a person's gender is "determined at birth." Fewer, 44 percent, think someone "can be a man or woman even if that is different than the sex they were assigned at birth." (Photo: iStock Photos)

Most of us didn’t need a poll to show us that liberals have lost their grip on reality. But Pew Research Center is providing one anyway.

In a survey that will probably leave you speechless about the radical bent of President Barack Obama’s party, Pew asked Americans what they really think about gender identity. If the results don’t surprise you, check your pulse.

First, the good news. A majority of Americans (though far less than one might guess, 54 percent) still believe that a person’s gender is “determined at birth.” Fewer, 44 percent, think someone “can be a man or woman even if that is different than the sex they were assigned at birth.”

That’s right. Only a 10 percent gap separates Americans on what, a decade ago, would have been a consensus issue. Now, after eight years of chipping away at the country’s moral sensibilities with bathroom mandates, Caitlyn Jenner homages, and Chelsea Manning pardons, the activist left’s quiet war on gender is having its effect.

But so far, it’s a one-sided victory. An overwhelming number of Republicans and Republican-leaning independents (80 percent) aren’t playing these liberals’ game of make believe. They think that a person is born whatever gender they truly are. Amazingly, an enormous number of Democrats and Democratic leaners disagree: 64 percent, to be exact. That’s a jaw-dropping population of political misled and scientifically misguided people.

No wonder we’re having to debate commonsense bathroom guidelines, driver’s licenses, classroom pronouns, and military policy. With the exception of black Democrats and Hispanic Democrats, (55 percent and 41 percent, respectively), Obama’s reality-optional politics have had a major effect on his party’s agenda.

Breitbart broke down Pew’s numbers and uncovered this stunner: “The survey,” Neil Munro points out, “finds that Democrats with a bachelor’s degree or more education are more likely than other Democrats to say a person’s gender can be different from the sex they were assigned at birth. About three-quarters (77 percent ) of Democrats with a bachelor’s degree or more say this, compared with 60 percent of Democrats with some college and 57 percent of those with a high school diploma or less. No such [education] divide exists among Republicans.”

In other words, the supposedly “more educated” class of Democrats are the ones denying science and basic biology. Republicans, by contrast, stand steadfastly behind a person’s DNA as the defining factor of a person’s gender—regardless of their age, race, or education.

Asked if America has done enough to accommodate people who identify as transgender, only 32 percent say the country has gone “too far.” Thirty-nine percent think we haven’t gone far enough.

They’re the ones willing to sacrifice women and children’s safety, national security, and religious liberty on the altar of liberal deception. They’re the ones eager to discard reality as a means to a political end. But regardless of what they say, truth is not up for self-determination. And a nation that thinks otherwise not only deceives itself, but dooms itself as well.