School Choice on the Front Line for Military Families 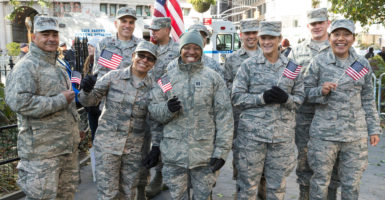 “Every child and family is different, and education policies should reflect those differences,” Rep. Jim Banks, himself in the Navy Reserve, says of helping parents in the military. Pictured: On Fifth Avenue, soldiers enjoy the Veterans Day parade in New York City. (Photo: Pacific Press/Sipa USA/Newscom)

Men and women of the armed forces worry about their children’s education while deployed overseas, says Rep. Jim Banks, R-Ind., and Congress can do something about it.

“Most people don’t realize that our national security and military readiness is significantly affected by the quality of education made available to children of service members,” Banks said during a program Monday at the Capitol Hill headquarters of The Heritage Foundation.

Banks offered education savings accounts as an alternative to local public schools, noting that the availability of this financial tool is growing across the country.

Banks, who serves in the Navy Reserve as a Supply Corps officer, deployed in 2014 and 2015 to Afghanistan while a member of the Indiana Senate. He is also the father of three daughters, so he has experience being overseas with family back at home.

A supporter of school choice for military families, Banks said he fought for school choice in general during his tenure in the state Senate from 2010 to 2016, when he was elected to Congress.

In 2011, he noted, Indiana “created the first statewide voucher program for low- and middle-income students.”

About 4,000 students used the vouchers to move from “failing public schools” in the first year of the program, he said, and in 2016 more than 34,000 students were enrolled in what is now called the Indiana Choice Scholarship Program.

Indiana has 93 charter schools attended by more than 43,000 students, he said, and test scores and graduation rates have risen since introduction of the voucher program.

According to EdChoice, an organization that researches school choice issues, education savings accounts allow parents to “withdraw their children from public district or charter schools and receive a deposit of public funds into government-authorized savings accounts with restricted, but multiple, uses.”

Parents can use the savings accounts to customize their children’s education, Banks said. As an example, he said parents could spend 90 percent of the account on their children’s tuition and what’s left on advanced online courses.

“Every child and family is different, and education policies should reflect those differences by giving every family complete control over how they spend their education dollars,” the Indiana Republican said.

Educating their children is an important factor for service members as they decide on how long or where to serve, Banks said, since the children typically must attend the school closest to the military base.

That may not provide the best education, he said, and the situation causes worry.

“That’s why I have been working on legislation that would allow for federal aid dollars traditionally paid to local school districts with military families to instead be utilized by parents directly through education savings accounts to provide for choice and flexibility,” Banks said.

Brooke Medina, a communications fellow at Civitas Institute, a government watchdog in North Carolina, spoke as part of a panel discussion that followed Banks’ remarks. Medina, a mother who is the wife of a serviceman, said she agrees that an education savings account would give her family flexibility.

“Our family has chosen [to] homeschool,” Medina said. “We’ve made the financial sacrifices to do so by me staying at home. Eight years is what we had homeschooled for.”