Free Speech Is Dying on College Campuses. Here Are 5 Ways to Revive and Protect It. 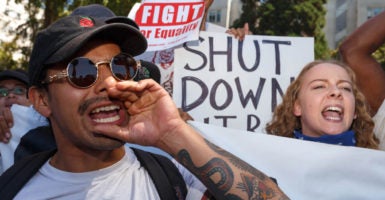 During the past 18 months, college students have engaged in disruptive and even violent activities toward guest speakers whose ideas they considered offensive.

In response, college administrators have tended to capitulate to—or collaborate with—the demonstrators by disinviting scheduled speakers and disciplining students or professors whose views were considered offensive.

In fact, recent studies by the Foundation for Individual Rights in Education and the National Science Foundation together reveal that approximately 90 percent of colleges and universities have policies that either prohibit or substantially restrict free speech that is constitutionally protected.

Americans should beware. Unless we act to safeguard free speech on campuses, this depressing trend will continue indefinitely until the censors have gained control not only of universities, but coffee shops, churches, and public squares.

What can we do to safeguard free speech on college and university campuses? Here are five ways that all of us can play our own unique role.

1. American citizens: Make a fresh case for the value of free speech.

Each of us should leverage everyday opportunities—coffee shop conversations, community gatherings, and Facebook threads—to help our fellow citizens understand that censoring free speech undermines their best interests in at least three ways.

First, censorship erodes the free and democratic nature of American society, tilting us in an authoritarian direction. If today’s public institutions are free to ban one set of offensive views, they’ll be free tomorrow to ban an entirely different set of views.

As legal scholar Eugene Volokh has noted, Christians could be banned from criticizing certain tenets of Islam, and vice-versa. Pacifists could be restricted from criticizing the military. Conservatives could be disciplined for arguing that there are biological differences between men and women.

In other words, the ideological winds change from season to season. If free speech ceases to be treated as a universal right, students today who are eager to suppress other people’s speech may one day find their own speech being suppressed.

Many of the ideas we cherish most—such as racial and gender equality—were once considered offensive and even evil. Yet they are now welcomed precisely because courageous citizens were free to promote these once unpopular ideas in public discussion and debate.

Third, censorship encourages hypocrisy and undermines our ability to persuade. If our society suppresses free speech, we won’t know who people really are or what they really think.

People who hold offensive and even hateful views will probably hide those views, meaning that we will never be able to persuade them toward a better way of thinking.

2. College students: Convince your peers that censorship undermines their education.

Well-meaning student activists don’t realize that shuttering free speech on public campuses undermines one of the most significant aspects of their education. Public universities should serve as microcosms of a free and democratic society.

The purpose of a college education isn’t to reaffirm students’ beliefs, it is to challenge, expand, and refine them—and to send students into the world with minds that are open and questioning, not closed and self-righteous. This helps young people discover their talents and prepare them for citizenship in a diverse, pluralistic democratic society. American society is not always a comfortable place to be; the college campus shouldn’t be, either.

That’s why the University of Chicago has made clear it will not support “trigger warnings,” cancel events involving controversial speakers, or create intellectual “safe spaces” where students can hide from views and ideas with which they disagree.

And this is precisely why college students should make clear to their peers that they welcome students of all backgrounds with whom they can discuss and debate a wide variety of ideas.

In years past, university professors understood that censorship undermined the university’s purpose, which is free inquiry.

Consider, for example, the 1915 “General Declaration of Principles,” issued by the American Association of University Professors, which states that freedom of inquiry and speech are “the breath in the nostrils of all [academic] activity” and that therefore the university should safeguard free speech even when that speech is offensive.

Today’s professors need to help their students to have the same respect for free speech, offering them a variety of ways to express their disagreement with a speaker’s views.

Instead of shouting down an invited speaker, students could put out a social media call to boycott the talk, leaving the speaker to express his views in an almost-empty auditorium. Similarly, students could organize a parallel event.

Even better than both of these options, however, is for students to attend the event, ask tough questions, engage in smart debate, and show the audience a better way.

In several instances involving shout-downs or disruptive activity, student demonstrators have defended themselves by claiming their activities were acts of free speech rather than violations of it.

Administrators should reject that line of reasoning. Many instances of disruption are, in fact, violations of constitutional freedoms. As Howard Gillman and Erwin Chemerinsky write, “[c]onstitutional lawyers have long recognized that the ‘heckler’s veto’—defined as the suppression of speech in order to appease disruptive, hostile, or threatening members of the audience—can be as much of a threat to rights of free expression as government censorship.”

In response to disruptive activity, therefore, administrators should make every effort to prevent such disruptions before they happen and control them when they do.

Even better, they should make policies—as the University of Chicago did—that clearly communicate the value of free speech as well as the disciplinary actions that will be taken against students or professors who undermine it.

In our efforts to safeguard free speech and protect the free and democratic nature of our republic, we should not let politicians off the hook.

As Frederick Hess and Grant Addison argued recently, we should urge the federal government to withhold federal research funding—which composes approximately 60 percent of research funds—from colleges and universities that do not safeguard free speech and inquiry.

Additionally, we should demand that politicians themselves refrain from engaging in their own literal and metaphorical shout-downs.

This was William McGurn’s point in a recent column, when he wrote, “No one asks whether [Washington’s cheap and polarized politics] might have something to do with a generation of students indulged in the view that they should never have to hear an opinion different from their own. How much easier it is to bang on windows, block an entryway and drop your F-bombs than, say, engage … in genuine argument.”

Americans of all stripes: Work together to safeguard free speech in public places.

Americans who are Christians have another reason to promote free speech: We want the liberty to preach the gospel and its moral teachings, even though many Americans find Christianity offensive and discriminatory.

If we do not push back effectively against attempts to shutter free speech, we may very well find ourselves—eventually—living in a nation whose public universities and spaces censor our attempt to speak about that which is most precious to us.

Few Americans, however, want to live in a nation that keeps us from expressing who we are and what we believe. For that reason, we should work together now to safeguard free speech on college campuses.

That is something Americans of all stripes should be able to agree on.