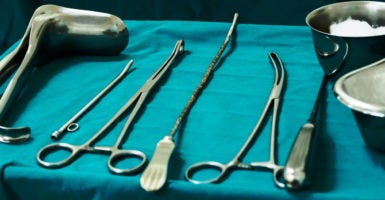 A coalition of pro-life groups challenging the law say it explicitly targets and coerces religious counseling centers into pro-abortion expression with which they disagree.

The law, called the Reproductive FACT Act, requires crisis pregnancy clinics to post a bulletin informing patients that the state offers subsidized abortion access. The FACT Act requires that the advisory appear in large font in a “conspicuous place” within the clinic.

“California has public programs that provide immediate free or low-cost access to comprehensive family planning services (including all FDA-approved methods of contraception), prenatal care, and abortion for eligible women,” the bulletin reads. “To determine whether you qualify, contact the county social services office at [phone number].”

“It’s unthinkable for the government to force anyone to provide free advertising for the abortion industry,” said Kevin Theriot, senior counsel at ADF. “This is especially true of pregnancy care centers, which exist to care for women who want to have their babies. The state shouldn’t have the power to punish anyone for being pro-life. Instead, it should protect freedom of speech and freedom from coerced speech.”

Providers that fail to comply with the law are fined $500 to $1,000 per violation, roughly the cost of an abortion in California. As such, the clinics say they are forced to chose between promoting abortion and subsidizing abortion through the state.

Similar laws adopted in New York and Maryland were struck down by the 2nd and 4th U.S. Circuit Courts of Appeal, though the 9th Circuit upheld California’s law in 2016. The Supreme Court is more likely to hear a case when circuit courts “split” or reach different conclusions on the same question.

The 9th Circuit concluded that California has a compelling interest in protecting the health of its citizens by regulating the medical profession.

“California has a substantial interest in the health of its citizens, including ensuring that its citizens have access to and adequate information about constitutionally protected medical services like abortion,” Judge Dorothy W. Nelson wrote.

A separate provision of the FACT Act requires crisis pregnancy centers that do not have a state medical license or access to medical professionals to post a second disclaimer, advising patients as to where they might receive medically supervised care.

The case, National Institute of Family and Life Advocates v. Becerra, is the second of the new term involving a conservative group’s challenge to a liberal state law. The other is Masterpiece Cakeshop v. Colorado Civil Rights Commission, involving the rights of religious objectors and state anti-discrimination laws.