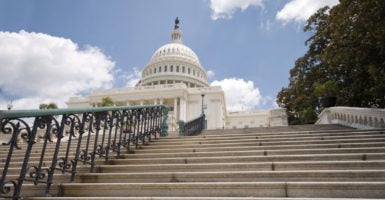 Tax reform bills are swiftly advancing through both the House and Senate. (Photo: iStock Photos)

Last week, the House GOP released the first concrete details on how Republicans plan to update the federal tax code.

The Tax Cuts and Jobs Act provides tax relief to many Americans and has the potential to facilitate real economic growth through important business tax reforms.

While the House proposal as a whole is certainly a step in the right direction, there are important ways to improve the House version of the Tax Cuts and Jobs Act to better meet the goals of pro-growth tax reform.

The recently released Senate bill improves on the House bill in many places and misses important opportunities elsewhere.

Many of the details of the House and Senate bills are similar. Both include five years of expensing for new equipment and drop the corporate income tax rate from 35 percent to 20 percent permanently, although the Senate bill delays the rate cut by a year.

The latter provision could delay much-needed economic benefits. In both bills, the standard deduction is doubled, the personal and dependent exemptions are repealed, and the child tax credit is increased by $600 in the House and $650 in Senate.

How the Senate Improves on the House

The Senate bill lowers marginal income tax rates for a larger share of Americans, including reducing the current top 39.6 percent rate to 38.5 percent. Although tax brackets are not consolidated as they are in the House, the Senate rightly abandons the House-proposed “bubble rate” of 45.6 percent that was intended to take back the benefit of the new 12 percent bracket for high-income earners.

The new proposal fully repeals both components of the state and local tax deduction, fully eliminating the subsidy for high-tax states.

The Senate bill simplifies the complicated House-proposed treatment of businesses that file as individuals, called “pass-throughs,” by allowing a deduction worth 17.4 percent of the businesses’ taxable income.

Such a deduction lowers the effective top marginal tax rate for small and pass-through businesses to 31.8 percent. The expanded business deduction is only available to the service industry for incomes that do not exceed $150,000 for those who are married and $75,000 for individuals.

The House-proposed tax on overseas profits was ratcheted up in the final days of markup to extract additional revenue needed to meet mandatory revenue figures. The Senate lowers the tax to 10 percent on overseas cash holdings and 5 percent on physical investments, down from 14 percent and 7 percent, respectively, in the House.

Where the Senate Misses Key Opportunities

The Senate, like the House, doubles the basic exclusion for the estate tax from its current $5.49 million per person. The Senate, however, never fully repeals the death tax.

Not permanently repealing the death tax is economic malpractice, leaving potential economic growth out of tax reform and potentially making it harder to fully repeal the tax in the future when those affected will be an even smaller minority of Americans.

The House bill removes a remarkable number of special-interest subsidies. The House eliminates tax credits for oil production, deductions for medical expenses and for student loans, the credit for rehabilitation of historic buildings, and a “new markets” tax credit, just to name a few. The Senate maintains each of these in the tax code.

The congressional process now has the opportunity to further increase the pro-growth potential of tax reform.

Done right, tax reform can unleash the U.S. economy, strengthen workers’ wages, and increase job opportunities. In the coming weeks, Congress has the chance to borrow the best components of the House and Senate bills to further enhance the proposed reforms’ benefits for all Americans.