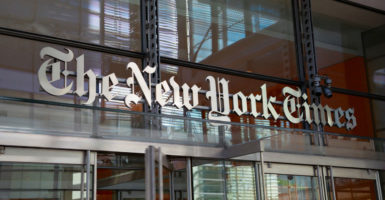 Leave it to The New York Times to misrepresent U.S. nuclear weapons strategy.

In its Oct. 26 editorial, the Times completely misses the point of possessing nuclear weapons: to deter large-scale attacks against the United States, assure our allies so that they won’t develop their own nuclear capabilities, and win a nuclear war should the extreme circumstance demand it.

The Trump administration’s 2018 Nuclear Posture Review has a unique opportunity to not only recognize these benefits, but also to put U.S. nuclear weapons policy on a sounder footing following years of neglect.

The Times’ metric for destruction is the elimination of one-quarter of a given country’s population. But the assumption that nuclear weapons are only good to kill civilian populations is faulty in the extreme.

Not only would deliberate targeting of civilians be immoral and a break with decades-old U.S. nuclear targeting policy, it would also unlikely deter countries like North Korea. The North Korean regime does not care about its population, it cares about its own survival.

The primary basis of our nuclear policy is not how many nukes we need to decimate enemy populations, but what kind of capabilities we need to deter and defend against enemy attacks.

Then, there is the qualitative element. Simply counting up our nuclear bombs tells us nothing about their quality or capability, including the quality and capability of the production complex that produces these warheads.

According to a recent Congressional Budget Office report, over the next 30 years, nuclear weapon modernization and maintenance will cost $1.2 trillion. As an annualized percentage of our defense budget, the nuclear program would swing between 5 and 8 percent.

This is a small price to pay for security from the only threat that the United States and its allies face—a threat that could totally destroy our way of life.

The third faulty premise in the Times editorial is that the more nuclear weapons the U.S. has, the more unsafe we will be.

This view supposes that because nukes are destructive, merely having any of them is dangerous. The logical endpoint of such thinking is to eliminate nuclear weapons from the world, which is a completely unrealistic goal given the world as we know it.

Other nations are increasing their reliance on nuclear weapons. Russia even thinks about using them pre-emptively in a regional conflict to de-escalate, since Russia cannot win a war of attrition.

Nuclear weapons have contributed to avoiding a war between the superpowers since the dawn of the nuclear age and have helped to assure U.S. allies of American support, which resulted in fewer states taking up nuclear arms.

A reliable nuclear deterrent, which can threaten our adversaries’ nuclear capabilities while protecting our citizens and allies, is achievable, and must be maintained and modernized. Nuclear weapons are not a needless expense as The New York Times portrays, but are instead vital to U.S. and allied national security.

By ensuring a sufficiently large and modern nuclear arsenal, and continuing to invest in missile defense, the Trump administration can demonstrate that a responsible nuclear posture enhances rather than detracts from our national security. The United States and allies deserve no less.